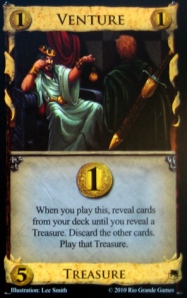 It takes a while to appreciate the power of Venture, but the first time you realize the power of chained Ventures is when you begin to realize how much of a ridiculous game-changer Venture is in the presence of any good trashing.

One of the fundamental principles of Dominion is that one good thing tends to be better than two mediocre things.  Tactician is a good example: having a big hand is helpful for just about every strategy, and so just about every hand is worth giving up for an even better one.  It counters quite a few attacks directly (Ghost Ship, Militia), and helps you set up combos that are otherwise too difficult to pull off (e.g., Throne Room x4 + Bridge x4).  Tactician even works with itself in certain rare situations, when you can find some way to discard your hand but still have money to buy cards (either using Actions for money, or something like Black Market/Tactician).

About the only time Tactician isn’t useful is in extremely trimmed Chapel-like decks, since there’s no point to giving up a turn if you’re drawing your whole deck anyway. But even with trashing, Tactician helps trash your stuff quickly, and you can trash it for some benefit later (e.g., using a Tactician turn to Forge away your crap, and then Forge the Tactician into something more useful).

It’s amazing how the +2 Cards can turn one of the crappiest Actions in the game (Secret Chamber) into one of the best.  I suspect this card sets a new baseline for “Big Money plus”, a la Smithy-BigMoney or Envoy-BigMoney: every time you play it, you’re guaranteed a Gold, and every time you play it and draw a Gold, you’re guaranteed a Province.  There are some fancy combos you can set up with it (Festival/Vault/Library), but in general, Vault is effective enough just played singly, to get the Golds, Grand Markets, or Provinces.

Like Tactician, Vault does best in poor-quality decks, since there aren’t many cards you really want to discard for $1 in a Chapel deck.  And it’s not quite as fun in Colony games, where you’re looking for Platinums rather than Golds.  On the other hand, there’s no other Dominion card as consistent or “safe” as Vault for improving your deck. 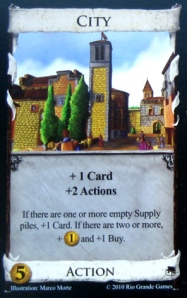 A notorious “trap” card, but activated Cities are some of the most fun cards Dominion has to offer.  If you haven’t already made progress on the Provinces or Colonies, there’s basically nothing that can stop a full-blown activated City stack.  If you know you’re building for them, it leads to Fishing Village-type situations where you can get away with buying many more terminal Actions than usual.  City stacks tend to lead to hilarious games when King’s Court, Bridge, and/or Goons are involved.

On the other hand, as a general rule, I avoid them in most Province games.  Unless another pile (usually Curses) is emptying, the only hope of upgrading your Cities is by emptying the City pile, and buying out all 10 Cities takes quite a while.  In addition, you might very well find that Level 2 Cities don’t actually help you much, since unless you have a ton of Monuments or Saboteurs or some fun terminal Action, you could have bought Laboratories instead if you just wanted to draw your deck.  By the time you hit Level 3 Cities, your opponent very well might find a way to end it on piles before you can use your fully-upgraded Cities.

You can basically never go wrong with buying a Laboratory.  This is the only $5 (so far) for which this is true other than Market, and realistically you aren’t going to strike much fear in your opponents with a Market-based deck.  Among non-terminal non-attacks, Laboratory and Alchemist are second only to Grand Market in win rate.

The fact that it’s totally OK to never stop buying Lab is a huge point in its favor.   A common problem with decks built around a terminal is getting stuck on the wrong money amount and thus unable to continue buying engine components.  For instance, a deck built around Mine that keeps stalling at $5 has to either buy more Mines and hope they don’t conflict, or buy something that doesn’t really work with the deck.  Alternatively, a standard +Actions/+Cards engine has to balance getting +Actions and +Cards separately, and is dependent on drawing its cards in the right order.  Laboratory-based decks face no such problems, and is therefore the easiest and most reliable engine to build.

Wharf is to cards as Fishing Village is to Actions.  This picture says it all:

That red line is not Outpost. 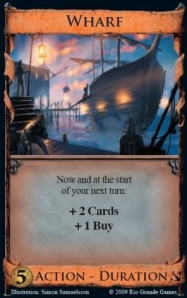 With the right +Actions, Wharf completely smacks Laboratory: after all, the Wharf duration bonus is equivalent to having played two Labs.  Indeed, it’s the only +2 Cards in the game that is worth building a draw engine around.  With Throne Room and/or King’s Court in play, it just becomes absolutely unreal, letting you get multiplied benefits both this turn and the next.

It loses a lot of strength without +Actions, but even then, you can safely get multiple Wharves with less chance of drawing them together, because you’ll often have one in play rather than in your deck.  The +Buy is really just the icing on the cake.

69 Responses to The Five Best $5 Non-Attacks