This is the third in a week-long series by WanderingWinder.  For the introduction and links to the other posts, click here. 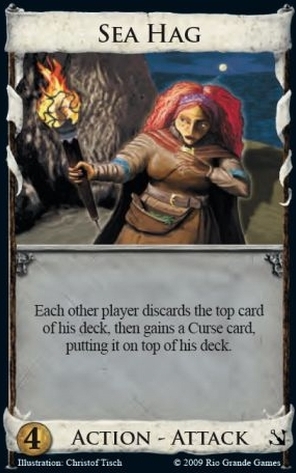 Everyone always talks about there being two kinds of decks – Big Money and Engine. But I think there are really 5 general kinds of deck, and I want to talk about the 3rd most prevalent in this article – the Slog – which falls in place between Big Money and The Rush.

What characterizes the Slog?
There is no clear dividing line, but some rules of thumb are

Slogs tend not to be many people’s ideas of fun (so it’s probably good that they aren’t good nearly so often as engines or Big Money), as you spend many turns doing not a whole lot but playing 3 to 4ish cards a turn (including treasure!) and buying one thing. Now, this may sound a lot like Big Money to you, but for what I’d really call a slog, it’s more like “small money” – in a Big Money deck, your average hand cash generally goes up past $6; in a slog, it wouldn’t.

Why play a Slog?
Usually it’s because your opponent sort of forces you into it. The number one reason to play a slog is because your opponent is playing junking attacks on you – Cursers, particularly Ill Gotten Gains, Sea Hag, and Mountebank, or Ambassador (looters MAY have a similar effect, but I haven’t played enough Dark Ages to be sure). Noble Brigand can work similarly by giving you Copper and disincentivizing you from buying more expensive treasures. Now, these don’t necessarily doom you to a slog, particularly if there’s trashing (an Ambassador *war* isn’t a slog… until you lose or give up), a super-strong engine, or some way of dealing with the Curses. Or just enough money sitting around with something productive to do (a la Jack of All Trades, Trader, Watchtower).

The reason you’ll voluntarily go for a slog, usually, is certain alternate VP cards – namely, Gardens, Duke, and Silk Road. For each of these, if you can just load up on lots of stuff, even junky stuff like Copper, and just wait and drag the game on, you can actually have really good chances to rack up lots of points. Now, it’s important not to get this confused with a rush, like a Workshop/Gardens rush, which is more about getting three piles gone quickly. Slogs want the game to last many turns, in order to reap their long, large, slow benefits.

Fairgrounds can sort of reach into this category, but usually for Fairgrounds, you start out as at least a money deck, and you generally want at least one Province, and 6 for a long time, which is usually a bit more than ‘pure’ slogs can really muster.

Philosopher’s Stone, of course, also pushes you to a slog more or less all the time, but it is just not that good very often; with the right deck, though (say, against Mountebank in some situations, after Familiars trade Curses, or of course with Herbalist), it can really shine and say ‘slog it up’!

What’s good for Slogs?
Well, aside from the alternate victory cards and P-Stone mentioned above, the biggest things are cards that let you discard for benefit (like Vault, Horse Traders, Cellar), because if half your hand is junk anyway you may as well discard it and get some use out of it.  Sifters (a la Cartographer and Warehouse) are strong for largely the same reason. VP Chip cards like Monument are good, too, but they almost always help engines more if ever there’s a choice for one, and they can often help Big Money more as well. Cards giving +buy or gaining something are also useful, since at the very least you can use them to grab Coppers.  Thus, Silver-gainers are really great for this kind of deck – if Copper tends to be good, then we can imagine what Silver can do for you.

General interaction with opponents
Opponents’ hand-size attacks don’t hurt as much as with say a Big Money deck, because you usually have very pitch-able cards. And one might guess that penalties from opponents’ cards will often help, too – opponents’ Vaults are brilliant for you, as are the free Silvers from Embassy. (Compare to Bishop, though, which becomes stronger for your opponent since you have little interest in the trashing.)  Cursing and junking attacks obviously still hurt (well, not if the junk is a Copper), but this is greatly mitigated in comparison with basically every other deck type – which is why they lead you to slogs in the first place. What really hurts a slog player, though, and this is in contrast to most every other deck type, is trashing attacks. Swindler, Saboteur, Pirate Ship, Thief, all very poor cards in general, really crush you by eating your economy, leaving you with a deck too swamped to do ANYTHING.

Against Big Money
Against Big Money, slogs can really shine. This is the best match-up, in the general case, for a slog deck. You largely make them try to buy out all the Provinces, or enough to overcome whatever you can put together off of the cheaper green, and they often just don’t have the longevity to do it. If they try to build up for a long time in order to have that longevity, the Slog player should either look to build up an insurmountable lead (i.e. via having a matrix of Duchies with Gardens, Silk roads, or Dukes; sometimes just Gardens; don’t try this against Colonies) or to get a lead and then end on three piles (you see this more in cursing games, where you can pile out Duchy+Curse and some other convenient card before they get enough Provinces). If going for the VP matrix route, you should make sure to build up your economy enough to be able to complete the matrix before stalling out, though you have to balance this out against your opponent’s ability to block some of your key card and deny you.

Against Engines
Engine is a very difficult match-up for the Slog, assuming that the engine is very viable at all. If the engine is very slow to come together, then the Slog player can hope to win by accumulating a VP matrix, though he usually has less time to do this than he would against a Big Money opponent (BM may beat engines to 4 Provinces, but very rarely will engine not be able to get all 8 of them faster). But the main weapon against engine players is the three pile ending – you can cut out their ability to build the engine as large as they want, in some cases, by threatening to be able to do this if they make piles too low, and this can help you GREATLY. If they DO continue to build to far, of course, you need to be able to look at that and be willing to potentially pass up more victory cards in order to try to secure the piling out before they can catch up to you.

Against Slogs (mirror)
In the Mirror, you want to get to your key cards pretty fast – for Dukes, this is Duchy, for silk road or gardens, it is those cards – much faster than you would in other match-ups. Whereas you need to build up a bit against a Big Money deck, here it’s almost all about winning that key split, which means you want to start in pretty soon. You want to wait as long as you can before starting, so that you have the longevity to continue fighting for 5-cost VP cards after the main fight is over, but NOT at the expense of the split itself, in most every situation, as those extra points usually don’t make up for a 2-card swing of your key card (or worse!). If you win the split, look to get to the three-pile ending as efficiently as possible – most often this is by pushing for it yourself, so that your opponent doesn’t have time to rebuild and go after Provinces or something, but sometimes this means to play it slow yourself, so that your superiority in the key card (which likely cues off having more cards in your deck, either total or of a specific type) can come through. If you lose the split, you need to judge whether you can possibly re-build and get enough expensive VP cards before the game ends to overcome your deficit, or more often to try to rush smaller green cards as fast as you can, to try to three pile ending where some luck might save you.

Against the Rush
This is another tough match-up. If it’s a poor rush, you can just grab enough VP early enough for them not to be able to end the game, and then you’ve basically won. Alternatively, if they are going for the same alt-VP card as you, if you can manage to hold your own on the split, you’re often able to outlast them on secondary VP cards (i.e. against a player who is going for a gardens rush, if you can hold off the split well enough, you can hope to come out ahead by being able to get more Duchies). Generally, though, a viable rush is going to own a slog pretty badly.

Against Combo
As is basically always the case, it depends on the combo. But generally this match-up is similar to the matchup with engine, only it tends to be worse, since a combo is more likely to be able to power straight through, is generally less prone to stalling, can build up more, and usually doesn’t have to worry as much about three pile endings.

This entry was posted in Articles. Bookmark the permalink.

5 Responses to The Five Fundamental Deck Types: The Slog