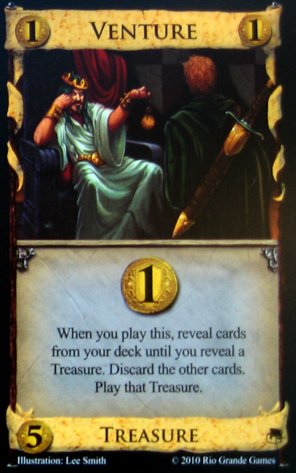 Venture is one of those $5 “Silver-plus” cards: it’s guaranteed to be at least worth $2, but usually provides a little extra.  It does best in high-quality Treasure decks, and therefore works well with Hoard, Platinum, Mint, Moneylender, and Mine.  Even Loan trashing is normally good enough to justify buying Ventures.  But even with high-value Treasures, Venture really depends on some kind of early trashing to get going: without it, it’s hard to justify buying Venture when so much other good stuff is at $5.  Mine can sometimes be enough to make Ventures the best $5 buy, as can Venture/Bank.  But in general, the card is too weak if you have too many Coppers in your deck.

Assuming you can get the trashing, Venture’s best feature is its chain reaction ability: if you can get to 5 or 6 Ventures and little other Treasure in your deck (a setup most likely achieved via Mint), then playing any Venture will net you at least $5, and probably singlehandedly get you a Province.

Decks that work well with Venture will also benefit strongly from an Adventurer, but in most cases, Venture is probably going to be superior.  Although it draws only one Treasure instead of two, Adventurer requires an Action to play and it doesn’t chain onto itself.  That being said, Adventurer is more helpful early on, when you don’t have enough Ventures in your deck to reliably chain them together.  In addition, Adventurer can be Throned or Kinged (to great effect), but Venture cannot.

Venture doesn’t play particularly well with Alchemy and Potion.  You’ll rarely want your Ventures to be hitting Potions, since Potion has little place in the kind of Big Money deck that Venture is best in.  Although it can be good for Potion-grabbing if you’re desperate to keep your Alchemist chain going, Alchemist/Herbalist is a more reliable way to keep the Potions on your deck.

Finally, Venture’s deck-cycling power is usually a good one.  When you’re improving your deck, you want your cards reshuffled as soon as possible.  It’s a bit weaker when you start buying Victory cards (since reshuffling your deck starts to dilute it), but Venture is still helping you find your Treasures amidst the sea of green cards.  And it can help you against attacks like Ghost Ship or Bureaucrat: just dump your Victory cards on your deck and use Venture to power through them.

This game is an example of how good Ventures can be if there isn’t another option at $5.  There’s no good way to trash Coppers other than Salvager, so any other good $5 would have been able to beat the Venture stack.  Instead, because Venture is the only $5, it’s easy to pile up a big stack of them, and with Platinums in play, they trigger for a ton of money.

A straightforward Chapel -> Venture setup.  Mountebank is problematic, but Upgrade/Chapel is enough to take care of the Coppers.  See especially the turns toward the end, where my Ventures go five levels deep.

Steward and Venture lead to a very fast Province rush, since buying Provinces doesn’t slow down a Venture deck very much.  Here, trashing Coppers with the Steward is more important than trashing Estates, which can be used as the tiebreaker.

This entry was posted in Prosperity and tagged venture. Bookmark the permalink.