Disclaimer: Dominion does a really great job of balancing its Kingdom cards.  Pretty much every card has some situations where it shines, and some situations where it doesn’t.  Nevertheless, some cards just end up being flat-out better than others, either because they are more useful more often, or just ridiculously good when they are useful.  Don’t expect this list to be very scientific. 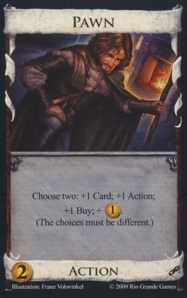 Yes, I know I just put it on the Worst $2 Cards, but honestly, this is one of the most all-around useful cards in the game.  It’s great early when you can afford to blind draw, it’s an easy way to get a non-terminal Buy, it’s ridiculously cheap, it’s a great disappearing source of money (good for Library, Minion, Grand Market), and yes, if all else fails, it’s +1 Action / +1 Card…

Being able to tuck away cards is really nice.  It works as a pseudo-“trash the top card of your deck”, if you can commit to never drawing from the mat, or alternatively a mini-Tactician, if you change your mind.  And it also happens to be the cheapest source of +Actions in the game.  Loses a point, though, for the possibility of self-inflicted rage (“Nooo, not my Platinum!”) matched only by Lookout.

I considered placing this above Haven, but ended up ranking it just below.  It’s decent (but not great) in a +Actions/+Cards chain (as befitting a $2 card), but it’s really nice even when you don’t have any +Actions.  Placing a card back on top is like a mini-Haven, and it saves you from drawing dead Actions, the biggest drawback to +Cards in the absence of +Actions.  But it ranks below Haven simply because it doesn’t feed on itself well: you can’t play multiple Courtyards since it’s terminal, and even if you have +Actions, playing multiple Courtyards on top of each other is not that great.

I really, really like this card.  Probably more than it deserves.  But it’s saved my bacon many times: literally any combination of cards benefits from a Haven, making those lovely massive Action chains that much easier to put together.  In particular, it gets rid of those situations when you draw your King’s Court all by itself, even though you have like a million other Actions in the deck, but your stupid opponent lucked into his stupid King’s Court with his stupid Mountebank and now you’re pretty much dead on arrival because of a random number generator.

In other words, Haven is great.

The obvious choice, and one I strained against making, but you simply can’t put the closest thing Dominion has to a must-buy anywhere but #1.  Indeed, I think Chapel is probably the strongest card that will ever be included in a Dominion set: what other card could possibly be such a first-turn must-buy and not be horribly overpowered?  Moneylender and Ambassador come closest out of the existing sets, but neither defend nearly as well against attacks.  Chapel is the gold standard of Dominion openers, and I suspect it will remain as such for a very long time.

10 Responses to The Five Best $2 Cards