This post was originally written by Titandrake and edited in collaboration with the Dominion Strategy blog team. 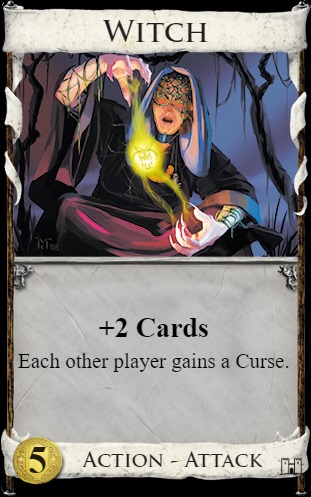 “Witch is a defining card in Dominion. … Curses are the strongest attack in the game, and Witch is as straightforward a Cursing attack as it gets. “

“No matter what kind of deck you’re playing, you will benefit from buying a Witch and playing it as often as possible.”

“Witch is a guaranteed Curser with no drawback and definitely one of the strongest cards in the game.”

If you don’t, you better have a good reason, and I mean a REALLY good reason.”

It’s been 10 years since Dominion came out, cards have shifted up and down in relative power level, but through it all is one constant:

Witch is still a good card.

You should still buy it.

If you don’t, you should still have a good reason, and I mean a REALLY good reason.

“But there’s a way to trash Curses!”

No, every Curse they trash is a Copper or Estate they didn’t get to trash.

“But the trasher competes at the $5 price point!”

You may want to buy the trasher first, but if you do, you should probably still buy the Witch later.

“But Mountebank is in the kingdom!”

Actually, after you play Mountebanks a few times, your opponents can have enough Curses to block Mountebank fairly often. In this scenario, Witch can turn into the better Curser. The +2 Cards can also be a big deal compared to the +$2 Mountebank gives you.

“But Moat is in the kingdom!”

Having a Witch still threatens handing out Curses. They only have to fail to have Moat once to get punished for it. And if they buy a lot of Moats, then you’ve hurt them in a different way: they spent a bunch of buys on Moats.

“But Lighthouse is in the kingdom!”

Okay. The Moat principle still applies – they only have to miss it once to get hurt. However, Lighthouse is genuinely different. As a non-terminal, it’s more okay to have several Lighthouses, and in some games (like Minion games) it’s even beneficial. Additionally, for Moat to block Witch, it has to be drawn in the opening hand. For Lighthouse to block Witch, it needs to be drawn any time in the previous turn, a much looser condition. A strong enough engine can block all attacks with just 2 Lighthouses.

So sometimes, they do have enough Lighthouses to make buying Witch redundant. But if you notice they’ve gotten complacent and are starting to miss Lighthouse turns, maybe you should reconsider that Witch…

“But Ambassador or Masquerade is in the kingdom!”

These are the most regular counters to Witch. Witch is great because giving away Curses is great. It sucks when they give the Curse back, especially while also thinning their own deck.

“But I’m drawing my deck, and I have a trasher, and I’m out of things I want to trash with it! I’ll just trash the Curse if I get Witched!”

Sure, this is true for now. It’s easy for this to stop being true, as you add payload or Victory cards to your deck. Much like the Moat argument, if they’re playing Witch every turn, you only have to fail to draw your trasher once to fall behind on having a thin deck. Once you fall behind the first time, it’s more likely you fall behind the next, and soon your thin deck can have 3 Curses in it. It’s a classic recipe for beating people who are overconfident in their deck’s reliability, and with Witch in the kingdom, you need to be extra careful not to fall behind in the deck size battle.

Sometimes, you can skip Witch, and you get to be a Hero. Maybe even a Champion. Just be careful out there. Curses make the world a scary place.