This article was written by DeepCyan 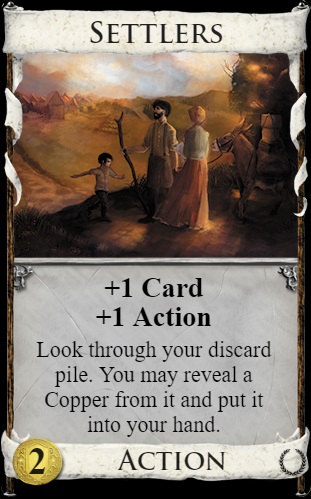 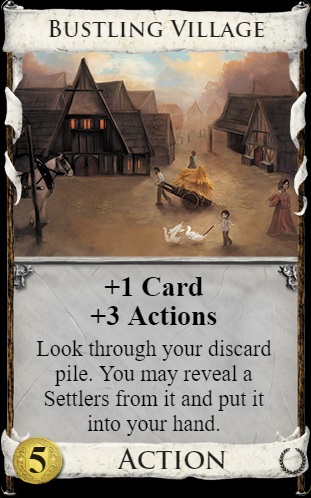 To understand the Settlers/Bustling Village pile’s inherent failings (and how to work around them), one must simply evaluate the two cards at face value. First, Settlers: on its own, it’s a useless cantrip. With a copper in your discard pile, it becomes a cantrip that gives you money – going off of Poacher’s value as $4 with a condition, albeit a usually negative one, an activated Settlers is, at first glance, a $4 card bought at $2. Not bad, right? Then there’s Bustling Village: on its own, +1 card,+3 actions, the same effect of playing two villages consecutively. Useful, but somewhat mediocre for a 5 cost. If Bustling Village picks up a Settlers, it becomes +2 cards, +3 actions – an even stronger variant of Lost City, which itself is a major power card for any action-heavy deck. If the subsequent Settlers picks up a Copper, then you have +2 cards, +3 actions, +$1, which appears utterly absurd for a mere 5 cost card. In a vacuum, these cards seem perfectly strong, albeit unreliable, but simply buying out the pile brainlessly comes with 2 fatal flaws.

1) To maximize the potential of the pile, you need to keep Coppers in your deck. One of the most important things you can do for your deck is to remove your Coppers and Estates as quickly as you can, though doing so removes Settlers’ only potential benefit to your deck, rendering it a useless cantrip. While this drawback only affects Settlers, which Bustling Villages can still pick up for an effective +1 card, this leads us to problem number 2.

2) The Settlers/Bustling Village pile only reaches its full potential off a filled discard pile. With a thin or empty discard pile, both Settlers and Bustling Villages are rather underwhelming cards. Sure, when you draw all your Bustling villages with a discard pile full of Settlers, your deck will work fantastically, but that’s hardly something you can rely on happening consistently. Furthermore, if you’ve made a deck that regularly draws itself, you’ll likely start your turns with an empty discard pile most of the time, making the pile an even weaker option.

So, knowing these weaknesses, why would this be a pile you’d ever want to go for?

I really need the +3 actions!

On boards with incredibly strong terminals and no other villages, it can sometimes seem tempting to drain the Settlers pile just to get those all-important +3 actions, discard pile benefits be damned. While this is certainly a viable reason to drain the pile, be very careful when going for this. In order to get to the Bustling Village pile, you first need to gain 5 Settlers which, for the most part, will rarely help your deck on their own. While you spend your buys and economy on the Settlers pile, your opponent can happily spend the time simply building up their own deck in anticipation. If you’re not prepared, your opponent can simply buy out the Bustling Villages with his superior deck once you’ve revealed them, giving them free reign of the terminals and leaving you with an incredibly lackluster deck. Because of this, you should usually avoid focusing on piling out the Settlers/Bustling Village pile without the ability to gain settlers both quickly and with minimal expense to your deck quality. Multiple gains are the easiest solution to this, through either +buys or action gainers such as Ironworks.

I can’t trash my coppers…

The Settlers/Bustling Village pile excels in boards with no trashing options. In these scenarios, Settlers permanently retain their Copper-collecting benefit, and you’re more likely to be unable to draw through your deck quickly, letting the Settlers/Bustling Village take cards from the discard pile more often. Sifters such as Warehouse make a trash-less Settlers/Bustling Village board even stronger. Not only can you use Settlers to pick up the Coppers that sifters discard, but you can also pick up Coppers with Settlers, then use Warehouse to effectively swap them for cards you actually want in your hand. Through this, Settlers can help negate the hand-size decrease that most sifters cause. Discard-for-benefit cards such as Artificer and Storeroom are also less costly to play, as you can pick back up the Coppers you discard. A special mention goes to Stables – through Settlers, you can effectively reuse Coppers discarded by Stables through picking them back out of your discard pile, letting you play multiple Stables while mitigating its potential drawback to your economy.

I can’t even draw half my deck…

Being able to consistently draw your deck is hardly a guarantee. In games with junking attacks, bad or no trashing options, and/or no reliable draw or good cantrips, you may end up in a slog – games with slow cycling, bloated decks, and weak economy. In these games, the Settlers/Bustling Village pile will simply be far more consistent, as a filled discard pile means that your Settlers and Bustling Villages are more likely to hit. Sifting cards are also sometimes strong in slogs, which can also work to your benefit since sifters synergize quite well with the Settlers/Bustling Village pile, as discussed earlier.

What if none of the above is true?

Well, the Settlers/Bustling Village pile will hardly be a power card in these sets, but it will almost never be a pile to stay away from. As a cantrip, Settlers can’t necessarily hurt your deck, so if you hit $2 and don’t have anything better to grab, there’s no shame in picking one up. If nothing else, a Settlers and a little bit of luck can definitely be a nice boost in the early game, letting you pick up Coppers from the discard pile as a temporary economy boost or just for more efficient trashing. In 3 or 4 player games, sometimes the Settlers pile will simply run down passively if every player picks up 1 or 2 copies on a dud turn.

In this case, it’s best to treat Bustling village as a somewhat value-for-money village purchase, and a nice pickup if your deck is heavy on terminals. Unless you’re talking about Rats, Dominion is rarely an all-or-nothing game – if you think a Settlers or Bustling Village will be handy and have the buy/economy to spare, you might as well grab a couple.