This article was written by Tracer. 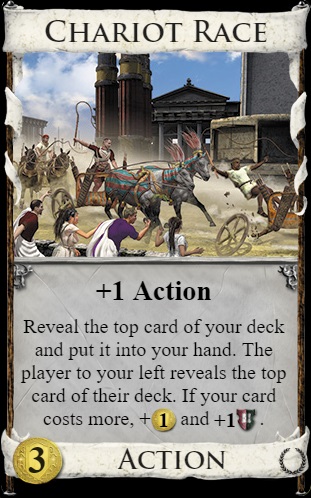 The promise of Chariot Race is in its potential to provide points while not making your deck any worse. The somewhat random nature of what is on top of decks makes this promise inconsistent; but it is fulfilled often enough that ignoring the card completely is rarely viable as it can act as a significant source of points. While some turns will yield nothing from your Chariot Races due to an opponent’s topdecked expensive card (and as such relying on Chariot Race as a source of coins is inadvisable), there will usually also be turns where each Chariot Race played scores, and these turns are when you build a points advantage.

While Chariot Race often features prominently on boards, it is still important to have a functioning deck before gaining Chariot Races in high quantity. This means trashing down and then building draw, both of which will help with getting points from Chariot Race once you have them. If in the middle of that process you end up with a spare gain, a Chariot Race will often be preferable to say, a Silver. Once you have done this you can emphasize Chariot Race without risking falling behind, assuming there isn’t anything that can lead to explosive decks, such as Bridge or Horn of Plenty, in which case the speed of a megaturn from those will not allow Chariot Race to score enough points to be relevant.

More directly, one can also look to control what is on top of each of the decks. For the opponent, attacks such as Scrying Pool are the most obvious way to do this: you can seek to leave a cheap card on top. Also notable are cards like Council Room, which, while not giving information about what is left on top of the opponent’s deck, can remove an expensive card that your Chariot Races cannot beat. For your own deck, both cards that directly manipulate the deck such as Courtyard or Sentry and also ones that give information about what is on top such as Ironmonger are relevant – in the former case to place an expensive card on top and in the latter to choose not to play a Chariot Race should a cheap one be on top. Also important are midturn gains – once you draw your deck you can potentially gain a Gold then play a Chariot Race which has a decent shot of hitting.

There will be times due to the nature of the card that one player will get luckier with Chariot Race and win the game because of it; however, a better deck or more clever player will more often than not be able to take advantage of Chariot Race to win.