This article was written by Chris is me with editing help from the Dominion Strategy blog team. Dominion Strategy blog content has been coming out at a slower pace over the past few weeks, and will continue to release at a slower pace for the near future. The blog team is looking forward to ramping back up in several weeks, and we appreciate your patience. 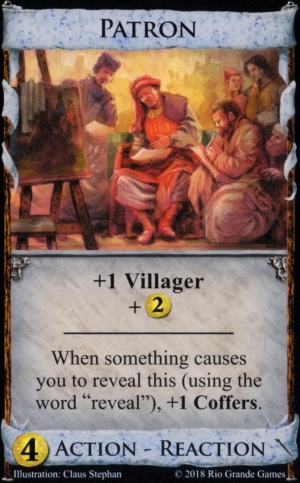 What does Patron do?

In simplest terms, Patron will convert a spare Action you may have into a Villager while also producing +$2. Except in the case where you have no Actions remaining and no Villagers available, Patron is essentially strictly better than Silver. Patron also has a neat Reaction that will give you an extra Coffers when revealed by something.

Why is Patron’s on-play effect useful?

Patron gives you a Villager on-play while also doing something else (providing economy). Villagers are at their most powerful in the early game. Before you have thinned your deck and added a source of +Actions to it, an extra Villager or two can help you resolve terminal collisions, ensuring an otherwise unlucky shuffle doesn’t hurt your momentum. Additionally, the +$2 that Patron provides is useful early on for buying $5 cost cards. Sneaking in a Patron play or two in the first few shuffles thus ends up helping boost your momentum and consistency in this critical part of the game where bad luck could otherwise mess you up. In the worst case, where Patron collides with something else, you can still play both by immediately using the Villager.

Later on in the game, you can use any extra Action plays you have left to stockpile Villagers with your Patrons, providing some extra insurance when greening. The peace of mind helps avoid dud turns when your +Actions doesn’t align perfectly with your +Cards to start the turn.

Of course, there are also the many cases in which you’d prefer your economy to come from Action cards rather than Treasures. Patron can be drawn with Scrying Pool, multiplied with Throne Room, and skipped over by Loan, to name just a few.

Basically, while Patron isn’t going to give you a massive pile of Villagers the way cards like Recruiter do, it is useful to have in your deck simply because just 1 or 2 Villagers can save games for you and help you keep momentum through otherwise awkward collisions.

When The Reaction Matters

Patron is fine for many decks without the Reaction, but if you can reliably and repeatedly get that extra economy boost, Patron can be an excellent card and the primary payload of a deck. A Patron revealed once per time it is played is essentially better than Gold, and with any potential for multiple reveals, the effect compounds from there.

The best reveal cards for Patron tend to be nonterminal – they can be played frequently without a lot of other support, and they usually won’t use any of the Villagers Patron is stacking up. Menagerie and Hunting Party are two standout examples. Both reveal your whole hand on each play. Hunting Party is more powerful as it gives you some flexibility – you can either keep your Patrons in hand to stock up Coffers, or you can play them to grab your next Patron from the deck. Menagerie is a bit more awkward as it won’t play as effectively if you have multiple Patrons, but since Menagerie is so cheap, you can add them to a deck that doesn’t otherwise need them just for the economy boost. Patron is also an excellent addition to decks that use City Quarter for draw, as City Quarter reveals your hand on play and the extra economy will help you buy the expensive City Quarters. Scrying Pool also gets a mention, because it reveals every Patron that you draw in a turn, and it is good for Scrying Pool decks to not have to rely on Silver or Gold for economy.

There are many other useful reveal cards to look for. Advisor is a nice one, as it is nonterminal. Courtier is drawn to Patron’s dual-typing. Journeyman is terminal, but you do reveal everything you draw with it (similarly Royal Blacksmith reveals your hand after drawing). The list goes on.

Capitalism merits a special mention as it allows you to use Patron as essentially a next-turn Village. All your Villagers are free when you play Patron in the Buy phase. Throne variants have been mentioned before, but also worthy of note is Scepter, which can be used to squeeze out extra Villagers in the Buy phase if you need them.

In conclusion, while Patron is one of the least flashy sources of Villagers, it should definitely be considered in any deck that can find space for it. The $4 cost can make it awkward to open, but in most cases, if you were going to open Silver / $3 cost, you might as well make that Silver a Patron instead.