This post by Donald X. is the third of five previews for the new Dominion expansion, Dominion: Renaissance.

Coffers are like Villagers but for coins. Bam. Also Coffers appeared already in Guilds, though it wasn’t called that until the later printing. It’s money you can save for later. You can only cash in the tokens before buying cards; they make +$1 each. Guilds originally said “take a coin token”; this set says “+1 Coffers.” 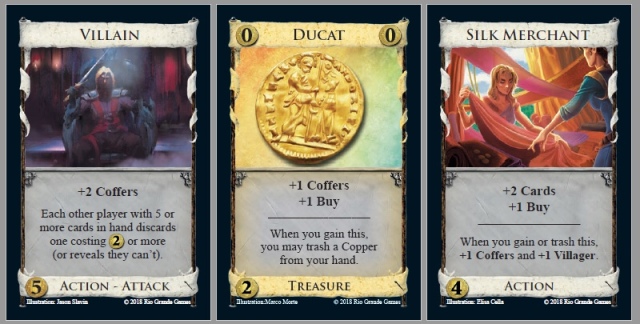 Villain has +2 Coffers, there you go, it’s that easy. It makes the other players discard something good, except early on they’ll have Estates and later on Provinces. But you know, in the middle there, it demands a good card.

Ducat is the Coffers treasure. If you have a Copper in hand when you get it, it essentially upgrades the Copper into a kind of save-able Copper.

Silk Merchant spills out tokens both coming and going. You may even get use out of it in the middle.