This article was written by Jake. 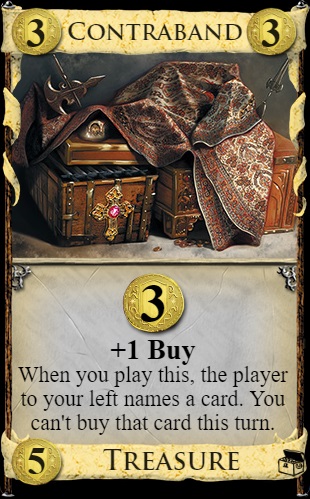 Often ignored, Contraband is considered by many a weak card. A lot of the time it is, but that’s to the extent that Dominion has strong and weak cards.

What Dominion really has are commonly applicable and rarely applicable cards, and the best players look out for all possible advantages, all the time, on every board.

Contraband is guilty until proven innocent in terms of utility— it’s unwise to start your game plan by dreaming up uses for Contraband. Rather, one should identify their deckbuilding and endgame goals, then decide whether or not Contraband is an enabler.

A $5-cost card that doesn’t help you get control of your deck has the onus to deliver significant payload. Contraband does, but with the restriction that you’re required to do the second-best thing with your turn. If there’s one clear best thing, the opportunity cost is that thing (because a $5 buy probably could have advanced you toward it somehow).

For example, when you and your opponent are fighting over the last Avanto, Contraband probably isn’t welcome in your hand.
Whereas you’re usually content having to buy Blessed Village instead of Worker’s Village, or two Markets instead of a Grand Market.

Strengths and how to capitalize on them:

It’s cheaper than Gold, but the real strength lies in the extra buy. Non-terminal plus buy is kind of rare, and Contraband provides money to help use it, making it an efficient means of picking up two or more cards per turn so long as there isn’t one you need in particular.

-Situations to capitalize on these strengths

-Boards with many useful supply piles or redundancy (more than one source of plus action, draw, etc.).

-A way to profitably trash the Contraband once you’re done building.

-Events you want to buy

It’s also worth noting the advantage you have by giving your opponent as little information about your hand as possible. This means you normally play it as your first treasure, and that it’s weaker when you need to reveal cards from your hand mid-turn, like with Menagerie or Legionary.

Contraband is terrible in big money decks and terrible on boards with one or two piles key to a dominant strategy. However, on boards with multiple build-routes/useful components, its plus buy makes it an efficient means of shoving them into your deck en masse.

The key thing to remember is that Contraband can help you build your deck, but it does NOT help you win the game with your deck.