This is the third of several previews by playtesters of Dominion: Adventures, introducing the next Dominion expansion.  This post is by Mic Qsenoch, prolific streamer.  The community is discussing these new cards in the Adventures Preview subforum 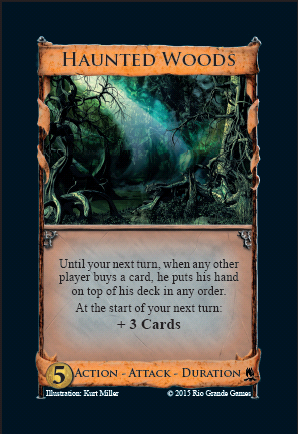 Orange is such a beautiful color, isn’t it? We now have Duration technology to make your opponent miserable during their turn. Plus the card has a sweet name.

Haunted Woods reminds me of Rabble in many ways. There’s the nonterminal draw, but the attack parts feel similar as well. The attack can be weak for much of the game, and there’s often ways to avoid it. I’ll let all of you talk about the different ways. But if you green without preparing your deck for a constant Haunted Woods barrage you might be in for a bad time. It’s also possible for the attack portion to be friendly interaction, letting you put good cards back on top of your deck. A lot of nice player interaction to be had in this card.

As a duration you won’t be able to play Haunted Woods as often as other card drawers, but getting +3 cards at the start of your turn is, like, the best time to get them! Sometimes people underestimate this fact.

Moat must be revealed (or Lighthouse be in play) when Haunted Woods is played to block the attack effect.