This article is written by Captain_Frisk.  He is currently ranked #17 on the Isotropic leaderboard. 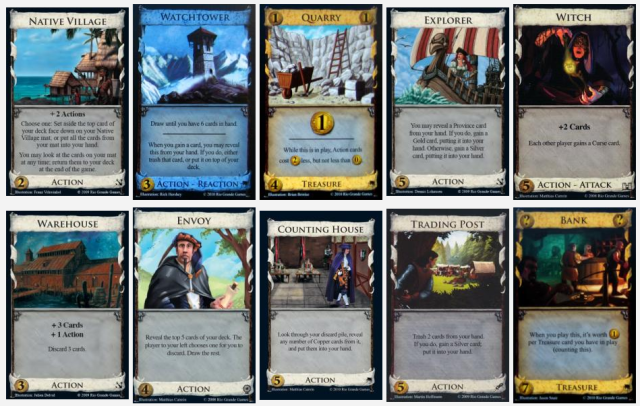 This is a 2-player game between me [Captain_Frisk] and Yaron. The log is available here (spoiler alert!).

Yaron is an excellent player, who is generally ranked above me on the leaderboard. As of the writing of this, I am 6-11 against him.

This game is not especially flashy, although after reading some of the comments from the game preview, there are some things available that I hadn’t even considered (Warehouse / Counting House).  This recap isn’t going to teach you a nifty new combo that you’ve never seen before. It’s a reminder that not every game has crazy combos, and you have to be very careful with what you choose to buy. Instead, I chose this game because:

Here’s what I noticed as I looked at the set:

I have the first-player advantage after the aforementioned Chapel beating.  I decide that I want a Witch, and I want it early. Attacks are better as P1, and I want to press that advantage, so I open with Warehouse / Quarry. The Quarry gives me a nearly guaranteed chance of getting $5, and the Warehouse will help me to find the Witch and play it often.

Yaron decided that Banks and Envoys were just too tempting, and opened Silver / Envoy.

I’m going to use theory’s notation, but with a few more breaks and looking at the reshuffle.

We both hit pretty much a perfect opening hand. I got my Warehouse, which triggers the reshuffle, and I pulled the Quarry in there as well, so I got my Witch. This is EXACTLY what I wanted. Yaron also hits it perfectly, using his envoy to get him up to big treasure and reshuffling.

I hit him with the first of hopefully many Witches, and get a perfect Trading Post crushing of estates. I elect to buy a second Silver instead of the second Witch because I will need coins, and I probably don’t want 3 terminal Actions at this point. I want the Trading Post because I’m still expecting Yaron to buy a Witch, and the value of Trading Post drops significantly if you don’t buy them early. Remember kids, Dominion is short. You may only get to play a given card 5 or 6 times, and that’s if you buy it early.

Yaron’s Province is too early for my tastes (I like to have at least 2 Gold equivalent treasures), but its hard to pass up the big hand, especially when you’re expecing the quality of your deck to be dropping rapidly.

Nothing flashy here. I Witch again, and now that the Quarry has done its job, I crunch it down. Obviously, I’d rather have hit the 3rd Estate. I overpay for that silver because I still don’t have enough Coin for my taste, and there are no repeating 5’s, so there’s nothing to really do here.   Yaron crunches his Estates, and picks up a Warehouse to deal with the Curses. At this point I’m feeling good, because the more non-coins that Yaron buys, the less useful his Envoy purchase is.

I intentionally didn’t play the Trading Post in my hand, so I could buy the Bank.   In retrospect, I probably should have played the Trading Post; in a deck where your coins are generally Silvers, the Bank isn’t going to be that much better than Gold.

We’re entering the end game now. I’m behind, but with a tighter (16 vs. 19) deck. So far I haven’t felt like there has been any ridiculous luck on one side or the other, we both drew our power cards at the right times, and our Trading Posts have been in mostly useful situations.

I can’t see what Yaron drew / discarded, but since he drew that $6 in his starting hand, he must have missed the Bank or the Envoy.

On turn 13, Yaron has a collision between his Envoy and his Trading Post (and has no Curses to trash either).  When he plays the Envoy, I sap the Bank, and he’s basically dead. It’s a bad draw, but at that point I already had 4 Provinces, we’re tied on Duchies. I think this is the point where he realizes the game is over, and doesn’t even bother drawing the game out by trying to make up the difference after I get the 5th Province. The logs unfortunately don’t tell me what either player drew with their Warehouses (or Witches), so I can’t see how often I drew a dead Trading Post, but here are some final stats.

I think the biggest takeways for players from this game should be:

[Editor’s note: one of these days we’ll feature a game with yaron that he wins.  Honest.]

This entry was posted in Annotated Games, Guest Articles. Bookmark the permalink.