Choosing the best and worst $4 cards turned out to be quite a bit more difficult than the $3’s and $2’s.  There were quite a few great $4’s, and it took a lot of effort not to have a 10-card “Five Best” list. 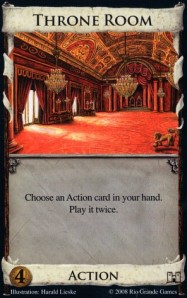 There were a bunch of candidates for this slot: Moneylender, Island, Remodel/Salvager, and even Treasure Map.   To be perfectly honest, you could substitute any of them here (or even in the top 5), and I couldn’t really argue with you.  But in the end, I went with Throne Room, for its Actionlicious combo potential.  The card was only bumped up to $4 at the last minute when Donald X. realized just how ridiculous $3 Throne Rooms could be in a heavy Action deck.   It lost some of its luster when King’s Court came out, especially since Throne Room sometimes leads to trouble when you do something like (Throne Room – Throne Room – Smithy) and then find yourself forced to Throne Room a Trading Post.  But Throne Room’s considerably more accessible price makes it much easier to pick up multiple copies and build lovely headache-inducing Throne Room recursion trees.  It makes certain cards really good (Conspirator, Shanty Town, Steward), and makes most of your attacks ridiculously painful (Sea Hag, Mountebank, Torturer). 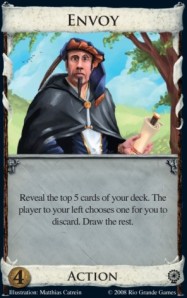 Really, this entry is for both Envoy and Smithy, which earn a joint #5 because of their impact on the game’s tempo. The presence of either of these cards gets the clock ticking: Big Money sets a 4-province baseline of ~17 turns, but Big Money + a single Smithy or Envoy cuts that down to ~14.5 turns and is more resilient to attacks to boot. Envoy and Smithy leave an indelible mark on Dominion strategy because their presence holds players to a higher standard: if you can’t get your deck together by that time, you’re going to get crushed.

On their own, of course, they’re also great, being the center of most +Actions/+Cards engines. Envoy gets the nod over Smithy, though, simply because the discard is usually not that big a deal compared to the benefit of drawing an extra card. 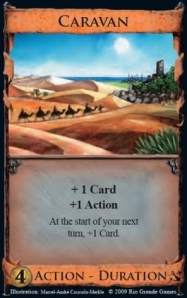 Pretty much the greatest cheap +1 Action / +1 Card in the game.   The appeal of this is absolutely obvious and incredibly easy to spam.  It makes cards like Ironworks and Talisman (almost) worthwhile: you can’t win by loading up on early Spies or Wishing Wells, but you can definitely win with a monster Caravan stack.   It’s especially nice with something to take advantage of your next ultra-turn (Bank, Forge, Vault), but there’s never anything wrong about increasing your handsize. 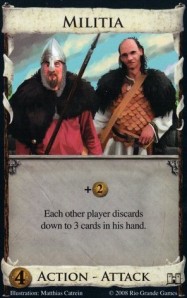 In the base game, Militia was second behind Moneylender as the best $4.  But with subsequent expansions and more trashing ability, Moneylender has slipped behind Militia in many sets.  In the absence of trashing, I might still take Moneylender over Militia, but as a concession to my multiplayer readers (apparently some people play Dominion with more than 2 players!  Who knew?), Militia is a devastating opener, especially for those ahead in the turn order.  It dramatically changes the pace of the game, turning the first few turns into painful slogfests as players struggle to get to $5 and $6.  And it’s especially gratifying at the end of a Council Room chain. 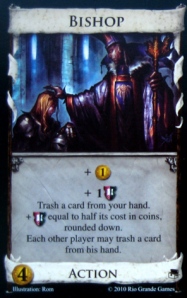 Usually cards that give benefits to your opponents are really, really powerful.  Bishop is no exception, and has the added benefit that its opponent-friendly effect goes away quickly after early game, especially in the presence of strong trashing.  In exchange for providing your opponent some minimal trashing, the typical Bishop will net you at least a Province’s worth of free VP chips.  You can build ridiculous five card decks with it (Bishop/Gold/Gold/Gold/Province), you can use it to dramatically exploit Quarry and Peddler‘s cost changes, or you can use it to grind up the crap that the Goons bring into your deck.  It’s a potent scoring card, and one of the most underrated openers. 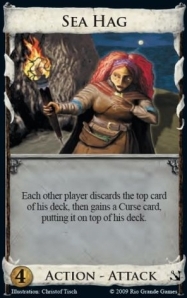 I think $4 is the cheapest a Cursing attack could conceivably be, since opening with two Cursers seems like a ready-made recipe for a degenerate games.  As it stands, Sea Hag is already a near must-buy (especially in multiplayer games); without an easy way to trash the top of your deck (Upgrade, Lookout), its Cursing attack is the most powerful in the game.  It’s a god-awful card once the Curses have been handed out, and the only “dead-end” $4 card (providing zero benefit to your own deck), but its attack is so strong that like Ambassador, you pass it up at your peril.

47 Responses to The Five Best $4 Cards