Combo of the Day #5: Ambassador/Curse 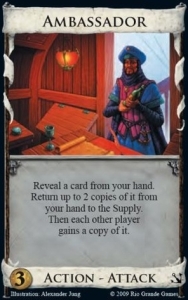 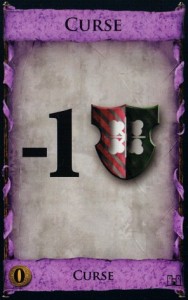 There are maybe two reasons in Dominion to buy Curses: either you want to 3-pile end the game, and you have a sufficiently large lead to buy the remaining Curses and still win, or you’re a mean-spirited player who loves attacking other players so much you’re willing to buy Curses just for the opportunity to give them to your opponents.  This combo is for the latter type of player (assuming they can stay away from Pirate Ship games long enough to notice).

This is a risky strategy unless you can reliably draw your Ambassador with the Curse.  Accordingly, it works best when you have a deck slim enough to consistently draw your whole deck.  Note that you don’t actually have to return the Curse to the Supply in order to give one to your opponents, which saves you from having to buy up a bunch of Curses.  It also lets you double or triple the attack with a Throned or Kinged Ambassador.

Masquerade can sort of substitute for Ambassador, but its biggest drawback is that your opponent will simply start passing the Curses back to you, thus negating the attack altogether.

Sample Game – Both players play Ambassadors, but fiasco goes for Gold instead of Laboratories, and while temporarily richer, the inability to consistently draw his Ambassador costs him in the long run as rrenaud’s consistent two Ambassadors per turn bury his opponent’s deck.

Sample Game – The Tactician allows both Ambassadors to be drawn and played, while the Haven at several points ensures the Curse is in the upcoming Tactician hand.

This entry was posted in Combo of the Day and tagged ambassador, masquerade. Bookmark the permalink.

6 Responses to Combo of the Day #5: Ambassador/Curse