In Kingdom Analysis articles, the Dominion Strategy blog team takes a randomly generated kingdom, discusses the dominant openings and strategies, then play-tests their ideas. The results are then analyzed and contrasted with the initial impressions. 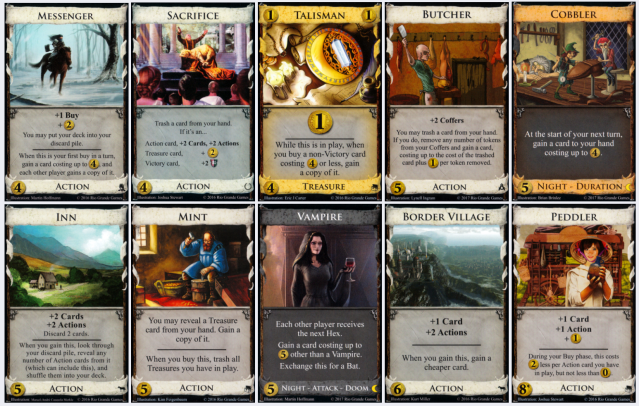 Initial reads of this kingdom are unimpressive. There is no way to increase hand size (other than the gain off of Cobbler, which doesn’t really count), limiting the potential for any sort of draw engine. Butcher is there, one of the top cards in Dominion, but it seems stifled with no draw. Perhaps the best approach was to play some sort of Butcher based money variant. This would turn Estates into Silvers, Golds into Provinces, and the Coffers would smooth out buys. Vampire seems interesting, since it gains Butchers, thins, and attacks – plus what else is there to do here, really.

A more fun deck here seems to involve a Messenger opening, so you can occasionally get a few Peddlers, with Border Villages and Butchers for more opportunities to trash into Province. You might even be able to squeeze a Talisman in there, for that chance of a big Peddler buy, but that seems really unreliable. The question is, can this kind of strategy, built with the proper pacing and order, compete with a more conventional Butcher money or Butcher + Vampire + money strategy?

Butcher money alone reaches the majority of points in 15-17 turns. Adding just Vampire was tried out, but that just slows things down considerably – you don’t gain your first Butcher until a shuffle later, making it harder to line up with Estates, and the trashing with Bat starts pretty late as well. As far as money strategies go here, this is pretty uninspired.

The deck with Messenger immediately had more potential. Assuming no mirror, a Messenger / Silver / Silver opening is essentially guaranteed to hit $5 and has a strong chance of hitting $6 on the next shuffle, which speeds things up a lot. The on-play cycling effect can be used to speed up the introduction of new cards, getting Butchers into play more often on average. Eventually you get a few Peddlers too, which are opportunistically trashable into Province. This basic formula seemed to be working.

While messing around a bit, one tester stumbled upon a clever tactic at the end of a shuffle. If they gained Inn, they could set up the perfect 5 card hand – at that time in that game, it was Border Village, 2 Butchers, and 2 Peddlers. Serendipitously, the player drew into another Border Village, and then Messenger again off the Border Village play, and that’s when they figured out that this board has a very potent and reliable golden deck.

A golden deck is a somewhat rare Dominion strategy where you build a deck with perfect consistency turn to turn, with no chance of a dud, consistently scoring points for several turns until the game is decided. Examples include Scavenger / Stash, Capital / Mandarin, etc. The golden deck here relies on gaining Inn every turn to setup the next hand, ensuring you can Butcher for Province every time.

After the synergy was discovered, some tweaking was necessary to optimize it. You want two Messengers, so that you can topdeck one after playing the other. You need at least two Butchers (though more is helpful), one or two Peddlers (to start), and two Border Villages. Once you have these cards in your discard pile or deck with a Messenger in hand and at least $5, you play Messenger to discard, buy the Inn, and shuffle in Border Village, Peddler, Butcher, your other Messenger, and ideally a second Peddler (though a second Border Village is also fine). The second Peddler guarantees a price point, but your two Border Villages will likely hit at least a Copper.

Each turn afterwards goes like this: You play Border Village, then Butcher the Peddler into a Province, play the other Peddler / Border Village, then play the Messenger to discard all. This guarantees at least $5 and 2 Buys, with four Actions in play, making Peddler cost $0. You can buy a Peddler and another Inn to keep the combo going. If you have at least $6 you can gain Inn via a Border Village buy to increase consistency, but it’s usually not worth burning a Coin token for.

Building Into the Golden Deck

The remainder of testing focused on the best way to build into this golden deck. Obviously you want to hit $5 and $6 as often as possible, in order to get the components quickly. The Messenger + Silver / Silver opening is the fastest way to do this, as having 3 different sources of +2 Coins gives good odds of hitting $6. From there your $6 buys will usually be Border Village + Butcher – you’ll need at least 2 of those, though 3 is nice. You need to find time for another Messenger, and at least a Peddler to start off. This isn’t as hard as it seems, as you have about two shuffles to do this and you’re loading up with multiple Action cards a turn.

A $6/$4 split on the first two hands is ideal. You can get Border Village + Butcher on the $6, and the second Messenger on the $4. The second Messenger can give out a Talisman if you want a riskier but higher reward card – being able to get multiple Peddlers in one Buy can save a turn or two, but you need some luck to line that up. Otherwise another Silver is fine. From there you should be able to get another Border Village + Butcher at some point, and once you find a way to buy a Peddler you’re good as soon as you draw that next Messenger.

A $5/$5 or $5/$4 split on those next two hands is tougher. You have to buy that Butcher outright, and that will reduce the number of available Border Villages. You can grab a Border Village with a Peddler later, but that’s far from ideal. This generally sets you back a turn or two.

On the second to last turn, you can set up your Inn shuffle slightly differently in order to get 2-3 Provinces at once. Topdecking Border Village, 2x Butcher, and 2x Peddler lets you get two Provinces on the last turn, since you don’t need Messenger anymore. You can usually just outright buy another Province by taking advantage of the Coin tokens that Butcher has been stocking up, on turns where your Border Villages have drawn Treasures. As long as you have 4 Tokens going in it’s guaranteed.

If you are running out of time to take a lead, and you have extra components, you can actually mill multiple Peddlers in a turn and still play Messenger. Each hand would need 2 Border Villages, 2 Peddler, 2 Butcher, and a Messenger. This is more of a desperation move than a consistent strategy, however – two Border Villages increase your chances of accidentally drawing the other Messenger, and you do have a chance of starting a hand without a Border Village in it. It also takes longer to set up as you can’t fire until you have twice as many components.

The big takeaway from this article shouldn’t really be the specific instructions on how to execute a 4-card combo. It is exceedingly unlikely that you’ll see this exact combo on a Dominion board you play at random, after all. The hope here is that you can see the thought process of determining how to execute a particular strategy on a given board. The keys to this are to look at the entire board, noting the unique attributes of each Kingdom card, and considering not just the execution but also the build order of a given strategy relative to all of the other cards on the board. This particular kingdom highlighted the power of deck control cards used in tandem. Time will tell what sorts of synergies and strategies will be revealed in future Kingdom Analysis articles.