This article is written by platykurtic, originally posted on the forum. 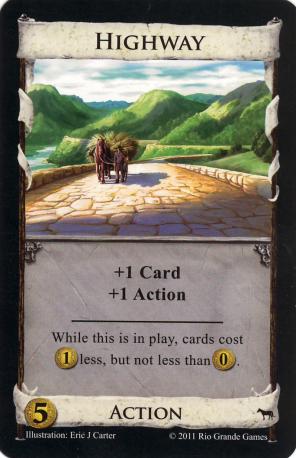 It’s hard to talk about Highway without talking about its more popular older brother, Bridge. Both provide cost reduction, but they do so very differently.  As a general rule to take advantage of cost reduction, you also need +buy and money (unless you reduce all costs to zero). Bridge provides all three, but since it’s terminal, you need a serious village/draw engine to take full advantage of it. Highway provides only cost reduction, meaning you need to get money and buys elsewhere, but as a non-terminal it can fit into a much wider variety of decks.

Without any +Buy, Highway is for the most part just a Peddler, with the cost reduction equivalent to +1$. There are times when you’d buy a 5$ Peddler, if you really need virtual money, but for the most part it’s overpriced and, moreover, there are better 5$ cards to be had. It’s important to note that the Highway card text is worded such that Throne Room and King’s Court don’t multiply the cost reduction, so in that sense it’s worse than Peddler, and some of the crazy combos you get with Bridge get short circuited.

Where the cost reduction does come in handy, however, is with cards that care about cost. This isn’t really specific to Highway, but as non-terminals it’s significantly easier to chain them and then a payload card, whereas with Bridge you’d need an engine up and running to even have a chance. There are a few categories here, and it’s worth going into the subtle tricks and pitfalls in their interaction with cost reduction.

Gain a card costing up to X$:
Workshop, Feast, Ironworks, Smugglers, Talisman, University, Horn of Plenty, Hermit, Altar
Highway expands the range of cards that can be gained by reducing their costs.  For example, play a Highway, then Workshop, and you can gain a card costing up to 5$. Of course, you could have just bought that card instead of the Highway, so you really need an engine to enable these happy collisions multiple times, ideally every turn. After enough highways, any gainer can start on the Provinces, or even Colonies. Horn of Plenty works especially well here since it doesn’t require actions. Highway makes your HoPs useful even when your engine doesn’t have many unique cards. Soon your HoPs can gain Highways and other HoPs, and so long as you don’t stall you get your megaturn.

Gain a card costing up to X$ more:
Remodel, Mine, Swindler, Expand, Forge, Rebuild
Remodel type cards can also benefit from a few well placed Highways. Since costs only go down to zero, after 4 Highways you can Remodel a copper into a Gold, for example, since the Gold only costs 2. If you plan to depend on this doing this to gain Provinces, you need to make sure to leave enough junk in your hand to Remodel. Swindler is a special case since you’re choosing the card for your opponent. This only matters if you’ve reduce the cost of the card you’re Swindling to 0$, in which case you can downgrade it to a Curse. Forge gets weaker as cards you might want to forge together start costing 0$, but once the card you want costs 0$ you can Forge any combinations of things into it.

Gain a card costing exactly X$ more:
Upgrade, Remake, Develop, Procession, Farmland, Governor
Much like the above category, you can reduce costs towards zero until you can Upgrade Coppers into Golds or Provinces. However, because Upgrade specifies “exactly 1$ more”, if you reduce the cost of the card you want to 0, you can’t Upgrade to it anymore.

Do something with a card costing exactly X$ less:
Develop, Border Village, Haggler, Band of Misfits
These cards don’t get any benefit at all from cost reduction, and in fact become useless when the card costs 0$, and there’s nothing costing less.

Do something with a card costing between $X and $X
Knights, Rouge, Graverobber
These are a mixed bag as you’d expect. By lowering costs you can attack or graverob more expensive cards, like Provinces, but you may also push cards down out of the range.

Do something with a card costing $X or More
Saboteur, Sage
Highway can focus these cards on higher priced cards, for better or worse. Both seek out cards costing $3 or more, but as you reduce costs that starts to include only the more expensive ones. In the extreme case, after 4 or 5 highways the only card worth $3 is Province (or Peddler of course, and add 3 Highways if you’re dealing with Colony). This make sage virtually useless and Saboteur deadly, though I’ve never seen that one pulled off.

Trash for benefit proportional to cost
Salvager, Apprentice, Bishop, Forge, Trader
These cards become weaker each time you actually play a Highway, since the cards you’re going to trash cost less. This doesn’t make them entirely useless though, especially if they help you get your Highway deck up and running (Trader’s not too relevant for that). If you can manage to play your TfB before your Highways, you can “buy low, trash high” to get extra benefits. You can hope for this to happen luckily a few times, but if you have an engine where you can keep drawing and avoid playing your Highways until you’ve used your TfB card, you’re golden.

There are a few good combos in there, but for the most part these are supplemental tricks you’ll use to grab an extra province or some engine parts. At the end of the day you still need to get your points by more conventional means, and with the right support highway can be excellent at this as well. It’s definitely an engine card though; if you’re not playing tons of actions, your Highways won’t collide with your other cards and they’ll just be overpriced Peddlers.

One key insight with cost reduction is that it’s often possible to win with a megaturn, which means getting all your points and ending the game in one turn. This may mean buying all the Provinces, but often if your opponent is buying the same cards as you, it becomes possible to end the game on piles with a small VP advantage earlier. Don’t forget to look for that every turn, it may be a bit of an anti-climax, but winning by one point is the same as winning by fifty, and your opponent can probably do it next turn. You also have to remember the extended Penultimate Province Rule, which is “don’t leave the board in a state where your opponent can win next turn, even if it means passing up cards you want, unless you’re behind and banking on a lucky break”. Megaturns let you build flimsy decks with no hope of surviving greening, since you’ll never have to actually play with the green cards you buy at the end. Highway allows for especially flimsy decks as a non-terminal itself; a little cycling or light trashing like Loan can sometimes be sufficient. The player who does the absolute minimum buildup before firing off their megaturn is likely to win.

Here’s an example of a game that should scream megaturn
http://dominion.isotropic.org/gamelog/201302/26/game-20130226-193803-bac46a33.html
There’s Remodel to clear up the deck a bit and gain Highways (benefiting from the Remodel trick explained above), Festival for money and buys, and Lab + Margrave for the draw to get past the Festivals and junk you haven’t trashed yet.

The obvious pairing for Highway is Market or Grand Market, since they provide money and buys in a convenient, non-terminal package. This combo is good enough that it’s got a wiki article devoted to it already. The short version is that via good trashing, cycling, or a little draw you get your deck to a state where you’re drawing through all your Highways and Markets each turn. This screams megaturn, and the chances are high that the game will end with the Highway, Market, and some other pile gone.

Powered up Cities are similar, but they bring endgame brinkmanship to a new level. The actions let you mix in some terminals early on to help with buy, and after a pile runs you’ve got draw. With two piles gone, Cities providing draw, money, and buys, and Highway reducing costs, the game isn’t going to last another turn. You don’t want to give your opponent that chance, so case is if you can drain the second pile during your turn with a gainer, so that you’re the one that gets the Unstoppable City Stack.

Market Square, Workers Village are the other non-terminal +buy cards, and they can work for a strategy like this too. It will be slower though and you’ll need to have some other virtual money, or have a lot of faith that you can reduce costs to 0. Festival similarly is missing one piece of the puzzle: draw. Too many will stall you unless you have some draw.

Forager and Counterfeit deserve special mention, since they thin your deck without requiring extra actions and provide +Buy with at least a little money. Neither one replaces itself though, so you’ll need some draw to keep playing your highways.

Tactician provides a bit of +Buy and a large hand from which to play more Highways. More so than usual, sacrificing a turn for a big next turn is well worth it with Highway, and if you gets some Highways in before playing the Tactician you may even be able to buy something then. As virtual money, Highway helps to enable double Tactician, which is always powerful. The big Tactician turn can also be the platform for your megaturn, even if you couldn’t have managed it from a five card hand.

Goons is another great pairing, since it provides money, +buy, and an alternate path to victory. Even without villages and just one Goons at the end of a Highway chain it’s powerful: you get 2 chips and can buy 2 cards for cheap each turn. With some villages and draw you can play multiple Goons, which can enable a victory chip strategy. The goal is to be playing multiple goons a turn and getting tons of points off of each buy. Normally with Goons you’re stuck buying mostly copper to make use of extra buys, but with Highway you should be able to get the prices low enough that you can buy zero-cost non-terminals instead and not clog your deck. With two or three Goons in play you can gain more chips per turn than your opponent can counter with victory cards and drain piles at your leisure. King’s Court brings this to the level of insanity, in spite of scaling up neither the cost reduction nor the chip gaining.

Highway also doesn’t conflict with the other cost reducers, Bridge and Princess. You’ll need an engine to take advantage of them, but Highway can supplement it without requiring any more draw, helping you get down to that all important 0$ where costs cease to matter and you’re only limited by your +Buy.

Highway will never pack quite the same power as Bridge; at 5$ you usually can’t open with it, and by itself it just doesn’t do enough. But with the right pairings it can be part of some awesome decks indeed. It’s a fun little card and worth an extra look on any board.

This entry was posted in Hinterlands and tagged highway. Bookmark the permalink.