This is a revised version of a guest article by jonts26, incorporating analysis from DG and jomini, and originally posted in the forum. 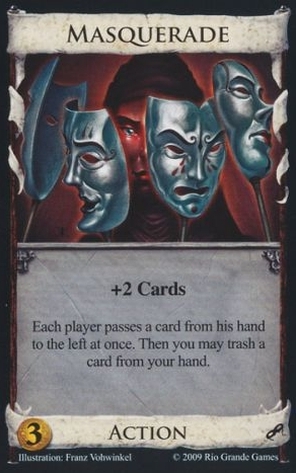 I love Masquerade. But not because it’s awesome. Well, it is awesome, but that’s not why I love it. The first Dominion I owned was Intrigue. And there are some fun cards in there, but none quite so fun as Masquerade. I would buy it almost every game and shout MASQUERADE!!! and wave my hands in the air upon playing it. Clearly this is a card designed for partying, and waving my hands in the air is about the extent of my dancing skills.

Masquerade is one of the strongest cards in the game. In fact, the most recent Top 5 $3 card list has it second only to Ambassador, and rightfully so.  It took a while for the community to grow to appreciate the strength of this card: people are typically drawn to the card by the neat passing mechanic.  However, for most games, the passing mechanic is the least important aspect of the card.  In fact, if you had a card which just offered +2 Cards and the ability to trash a card, it would be just as strong for many games.  But the ability to pass adds on a lot of very fun interactions and the occasional situation when the correct pass means the difference between winning or losing.

As far as playing “Big Money” goes, Masquerade is near the top tier of non-attack enablers.  Not much can dethrone Wharf from the top tier, but Masquerade is only a notch below.  The reason is that it combines both card draw and trashing: on their own, each of those abilities is fairly weak, but the combination of the two is what gives Masquerade such strength.

Let me explain.  First, trashers are normally poor Big Money enablers because it leaves you with a gimped early game hand.  (I Chapel four Coppers and buy nothing.)  But with Masquerade, you can simultaneously thin your deck and still have enough buying power to be improving your deck with Silvers and other $3/$4 actions.  In addition, the +2 Cards greatly improves cycling, allowing the card to come back into your deck faster.  Finally, the +2 Cards means you’ll often be able to find something worth trashing (since you’re searching through 6 cards instead of 4).

Since Estate trashing is so much more desirable than Copper trashing for Big Money games, you likely won’t need a second Masquerade. But you should definitely add another strong terminal into your deck: since Masq only draws two cards, collisions are more unlikely than if you were playing another terminal draw card like Smithy. Often in money games with another strong Big Money enabler, the correct move is to get both, and the Masquerade first.

Cursing attacks in particular tend to dominate money games. Masquerade counters them harder than most, so the best move is typically to open Masquerade and transition into your curser.  The exception being Sea Hag, which is simply crushed under Masquerade’s weight. The combination of no early game economy and the decent chance that the Curse comes right back to you simply gives the Hag no chance.  Familiar is also not very good: it’s a curser that takes some time to set up, so it gets crushed by Masquerade’s speed.  Masquerade can also handle Torturer (take the Curse and give it right back), but a very strong Torturer chain is one of those attacks even Masquerade can’t handle.

One final point, and this is particularly true with Masquerade/Money mirrors, or games with only one Buy, is that keeping an Estate for yourself (either by refusing to pass it or just refusing to trash it) can give you a huge advantage in the end game. You only need to win by 1 point. Certainly in the early game you want to aggressively remove Estates but as the game wears on, it is often to your advantage to leave yourself one Estate.

While Masquerade shines in Big Money games, it is darned good in engine games too. Again, it’s not the best card draw, and it’s not the best trasher, but it does both. And the thinner your deck gets, the more often Masquerade gets played, giving you good deck acceleration. Masquerade is particularly strong as an opening when there are strong $5 engine cards you want like Wharf and Bazaar. While Masq/Silver opening makes it difficult to see $6 for a little while, $5 is still very likely.

But the card is a double edged sword in these games. As you thin and improve your deck, you start running the risk of having a great hand, only to have a Masquerade played on you. So in any engine game that involves Masquerade, do not over-trash your junk. Trash just enough so that you are likely to still have a card to pass on an opponent’s Masquerade while still being able to fire your engine reliably. Easier said than done.

Special mention should be made for discard attacks. Masquerade tends to boost the effect of discard attacks.  For example, when Masquerade and Militia are present, you’ll often have to keep a junk card in hand when Militia is played to guard against Masquerade.  So Militia ends up hurting even more than usual.

Moreover, you can play mindgames with your opponent with Bishop, Vault, and Governor (cards that give optional benefits to your opponent).  With a hand of Gold-Silver-Silver-Curse-Province, for instance, do I discard to your Vault and hope you don’t Masquerade me?  Do I trash my Curse on your Bishop or hope to be able to pass it to you?

More advanced is being able to manipulate what your opponent passes to you.  Rabble is a great way of doing this: in the late game, Rabble can often set up massive stacks of valuable green cards ready to be Masqueraded on the next turn (or even worse, play Village -> Rabble -> Minion (discarding) -> Masquerade).

The way Masquerade works in a multiplayer game is nearly too complex to describe, what with its interactions with Torturer, Militia, and Cutpurse.  The key things to remember are:

1) Masquerade equalizes the worst card of everyone’s deck.  You better hope that the person on your right is building a high-quality deck that will pass you medium cards as opposed to total junk cards.  Similarly, you might be more willing to do things like buy an Estate with Hoard, or an Embargoed card.

2) Masquerade will be played far, far more frequently than in 2-player, meaning you should feel free to get short-term advantage cards (Baron, Moneylender) and count on being able to pass the junk away later.

3) If you can force someone else to do better to help you, you might want to pass more than your worst card.  For instance, as a Province player against two Duke/Duchy rushers, you’d probably rather see the Duchies split 6-6 instead of 7-5, and passing coin might help achieve that goal.  Or, with two Provinces left and enough money in your hand to buy one, you might want to pass enough money to the next player so that he can buy the last Province to give you the win.  Your appetite for this may depend on your gaming group’s politics.

Possession is not an attack. This is because your opponent cannot actually hurt your current hand or deck at large with it. Except, of course, when Masquerade or Ambassador is on the board. Passing is not trashing and it’s not gaining. So any cards you pass while Possessed remain passed. Now, Masquerade/Big Money is fast, and if there is no good engine, it’s unlikely that your opponent is able to buy Possession, play it, and pass enough points to himself before you can drain Provinces.

But if there is an engine, or a fast route to Possession, then buying Masquerade is very dangerous unless there is a good way to trash away your Masquerade fairly quickly. Except, well, Masquerade might be the card you need to really ramp up your engine and there might be no other trashing. Then what? Well, buy a Masquerade anyway, and hope the shuffle luck fairy is on your side.  You need Masquerade to get to the Possession faster, but you better hope you don’t have it in hand when your opponent plays his Possession!  And if your opponent stays away from Masquerade or trashes it by the time you grab your Possession, buy a second Masquerade and pass it over to him.  This is not a good way to make friends.

Well, I can’t go ahead and write an article on Masquerade without at least mentioning the infamous pin potential. By now, most Dominion enthusiasts are aware that the unique passing ability of Masquerade can lead to a game state where you can trash your opponent’s entire deck while leaving them with a 0 card hand every turn. Note that this only really works in 2P games, as you can only trash the deck of the player to your left, while any other players are free to do whatever they wish.

The pin comes in a variety of flavors. The only truly required card is Masquerade, but the other cards in potential pins are all fairly specific. Finding specific 3 and 4 card combos is exceedingly rare given the amount of possible kingdom configurations. As such, I won’t bother going into great detail but read this post for a detailed break down of possible pin methods.

Regardless of what cards you use, the goal is to reduce the opponent’s hand size and then play a Throned or King’s courted Masquerade with no cards left in your draw or discard. You pass no cards but you do receive a card from your opponent, which you immediately trash. Thus, each time you play Masquerade, you trash a card from your opponent’s deck while reducing their hand size by one. Just rinse and repeat until their entire deck is trashed. Also note: This, too, is not a good way to make friends.

This entry was posted in Intrigue and tagged masquerade. Bookmark the permalink.

Leave a Reply to BE Cancel reply