This is the third preview by Donald X. Vaccarino, introducing the next Dominion expansion: Dark Ages. The community is discussing these new cards in the Dark Ages Preview subforum. 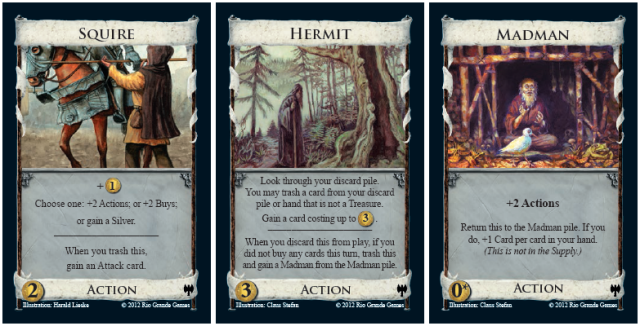 Squire is the complement to Steward that you always knew I’d make. Okay maybe you didn’t figure that one out. You get a choice of three things that Steward doesn’t get you, plus $1 in the bargain. It’s a pretty nifty $2, just for that. And if he gets trashed, then you get an attack, any attack on the table. You can Remodel a Squire into a Remodel and a Familiar.

Hermit is another. He’s normally content to just trash certain cards and gain some Silvers or something. But if you don’t make enough trips into town, he loses it. He goes mad. And then he blows up one day in a fit of card-drawing. Which is my way of saying, well it’s all there on the card. That stuff.

Hermit turns into Madman, a card that isn’t in the supply. You can’t buy a Madman; if you want one, you have to get a Hermit and then not buy something. And then you only get it once! Somehow it’s worth the trouble.

Turning a card into a specific new non-kingdom card requires a pile of ten of those cards. Yes do you really need ten, I know. But you do. And well how much of the set wanted to go to that stuff, rather than say new kingdom cards? So in the end I just did two of those. Now you know one of them.