While looking at this, I had jumped onto the page, sorted by “Win Rate With”, and then started in on the analysis. I noted that tournament had a win rate with of 1.02 (about 51% in a 2p game), which put it in Torturer / Wharf territory… a good card, but not Witch / Mountebank level. If you only look at this, Tournament looks like a slightly above average card. Unfortunately, it’s watered down because EVERYONE is buying it. When you also include the win rate without, you get a much different picture of the card.

So, based on this, its much safer to ignore torturer than it is to ignore Wharf or Tournament.

Read on for way too much data, and even a chart!

So, I decided to take all of the cards, and calculate their Win Rate Delta = [Win Rate With] – [With Rate Without]

I then grouped these deltas into a variety of buckets for easy summary. I ended up with the following thresholds (converted to 2p win % for ease of mental digestion)

And how did the distribution fall? Not at all like I was expecting. 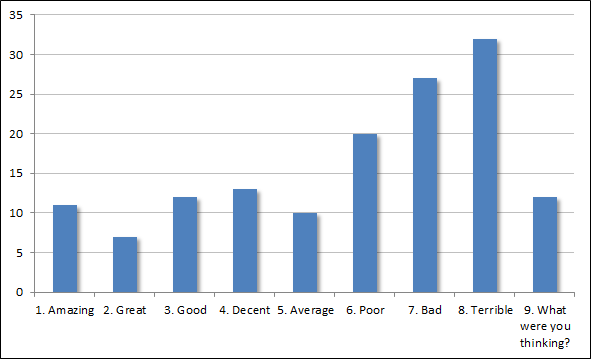 Below is the full set of cards, with some pithy comments. Please remember a few things before you rage at the placement of your favorite cards:

This is based on all isotropic data since the logs were parseable. This includes your stereotypical “village idiot” plays, and people buying chapels on turn 10 because theory has sea hagged them 10 times already. Just because a card is low on this list doesn’t mean its a bad card, it just means that in the history of isotropic, more games have been won when the card was ignored than when it was purchased / gained. Also, the Cornucopia cards are likely to be skewed because not only are people more likely to play them with other cornucopia cards (instead of pure random) where they may have additional synergy, but also because we don’t yet know how to use these cards effectively, but people are buying them anyway. This new metric is not scientific in any way… remember, the title of this article is “Fun with Popular Buys”. I had fun playing with the numbers, and I hope you will too.

No surprises here.  It’s bad to ignore the power attacks.  It’s damn near impossible to win without Colonies, and getting Prizes means you are buying Provinces.

Also some familiar faces here, but also some newcomers!  Note that the Cornucopia cards will no doubt move around over time as people learn how to counter them and use them effectively.  My experiences thus far have also put these 3 (Tournament, Hunting Party, and Menagerie) as cards that are very difficult to ignore.

I’m a little surprised to see Sea Hag down here.

Now we’re starting to find some cards that I really like.  I’m a little surprised to see cards like Caravan down near neutral levels.

Now we’re getting into some nice cards, but mostly non critical.  I would have expected to see Upgrade and Fishing Village a little higher on the list.

Now here are some real surprises… there are some decent cards down here.  Trading Post most likely because people buy it as a reaction to getting junk in their deck, and don’t get to play it enough.

Remember that this is not factoring in when the cards were bought, so despite the fact that Militia / Silver is a strong opening, Militia is not a good card to buy halfway through a game.

Starting to see some of the underpowered 5’s, villages and slow trashers that people might overbuy as reactions.

Lots of cards down here that frequently look good to newer players, but aren’t good in actuality unless you’ve specifically planned for it (Throne Room, University, Mine).  I’m surprised to see potion down here.

Most of these shouldn’t be a surprise.

Stay tuned for an upcoming feature where we look at the same type of analysis for a top ranked player, and how they differ from the standard player.

This entry was posted in Articles. Bookmark the permalink.