The bad $5 cards tend to be bad in a different way from the bad $4 and $3’s.  None of them are actually that bad for your deck (well, except maybe Saboteur), since most of them are strictly superior to Silver.  It’s only when you start comparing them to the good $5’s that you realize just how steep their opportunity cost is: I’m happy to get all my Silvers swapped for Stashes, but I would infinitely prefer Mountebanks instead. 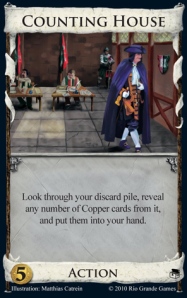 I hate putting this on here, since hey, it’s a specialized strategy, and if you try to add Counting House to a normal strategy of course it won’t work well.  But it’s really, really hard to get a decent Counting House engine going.  Warehouse is about your best option, but without +Buy, it’s difficult to find turns to buy Copper, which means you aren’t ever going to get more than $7 from Counting House.  And while that sounds like a lot, it really isn’t if you have no other source of money!  It does counter Mountebank decently, and is of course immune to handsize-decreasing attacks.  But it’s rarely the best strategy on the board.

It got a boost in Prosperity, but without Platinums, it’s just far too slow.  Trash your Coppers … one at a time … to get Silvers.  With any half-decent trashing, you’re better off just trashing your Coppers altogether.  In an extremely Action-rich environment, it can be useful to upgrade all your Treasures very slowly, but you might as well just use Expand instead.  Most of the trash-for-benefit Actions are nice for the flexibility they give you in the endgame; Mine does no such thing, and in fact gets worse and worse as the game goes on: if you don’t see the card again, Mine is a Copper you have to spend an Action on.

Incredibly dangerous.  It’s excellent when there are multiple good options at $6+, but when there isn’t, it’s trivial to shut down a Contraband player by repeatedly denying Gold.  If you can survive that, you’ll find yourself in late game wishing your Contrabands were just Coppers, since Contrabands are unplayable anyway lest you get blocked from Provinces.  The +Buy is nice, and can be helpful in setting up cheap Action chains, but one Gold is almost always going to be preferable to two Villages.

Borderline in Province games, near-useless in Colony games, and totally smoked by Hoard.  Admittedly, very few $5 cards give +$3, but it’s too difficult to get that all lined up.  If you’re saturated with Provinces, you should probably be buying Duchies; if you have great draw, then you should have probably gotten another draw engine component instead of the Explorer, and the Gold is probably just going to gum up your engine anyway.  So you have to get this early, and then it’s just basically a Silver-gaining machine that gets a little better in the late game, assuming you can compete for Provinces with a Silver-based deck.

Many of the $5 Kingdom cards are “Silver-with-a-benefit” cards.  Stash is one of them, but got stuck with pretty much the worst benefit.  You can’t move it around your deck whenever you please — only when you shuffle — so it’s difficult to make an informed decision as to where to put it.   They get a little better with multiple copies, since you can stack them all together to get a Province, but then you’re running a Silver-based deck: good luck in Colony games, or trying to deal with any handsize-affecting attack whatsoever.  Not to mention their unique backs make it easy for people to mess with you. 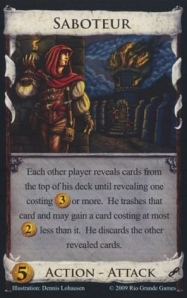 Maybe this isn’t really the absolute worst $5 card, but it’s got all the X-factors working against it: wildly overrated, leads to groupthink, encourages an unfun game, high-variance, even makes people quit playing Dominion.  There’s a (very small) strategy space around this card in advanced games, but I think (like Possession), Saboteur should probably be taken out of beginner games until they gain a greater appreciation for when exactly to use it.  There’s a reason why it has the highest “win rate without” out of all the $5’s.

118 Responses to The Five Worst $5 Cards