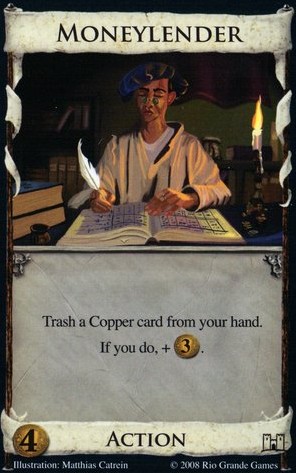 One of the best opening $4’s.  There’s very few occasions where I wouldn’t open with Moneylender; it’s more useful than Baron early on because it trashes (rather than discards) and works with Coppers (which are more plentiful than Estates).  Moneylender even works with Chapel: Moneylender can bootstrap Chapel decks into $5’s and Golds as quickly than a Silver while thinning the deck faster, and if there are no worthwhile $2’s, then drawing Silver/Chapel is just as useless as drawing Moneylender/Chapel.

Unfortunately, there’s not much use for Moneylender outside the early game.  Look for a way to get rid of it, even before it trashes all 7 Coppers; you’re just not as likely to draw it with your Coppers after three or four trashings.  In the midgame, if you can draw your entire deck, then Moneylender can be a decent defense against Mountebank and Ambassador.  And if you feel especially daring, it might be worthwhile to spend some extra Buys on Coppers if you have excess card-drawing capacity.  More often, though, the Moneylender just ends up getting fed to the Salvager, Forge, or even the Chapel.

This entry was posted in Dominion and tagged moneylender. Bookmark the permalink.