Combo of the Day #7: Spy/Thief 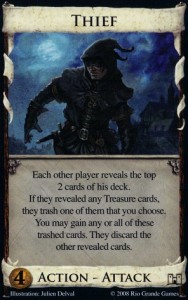 Thief is usually a pretty bad attack.  Early game, you do nothing but help your opponents by trashing their Coppers.  Mid game, it’s just not reliable enough to justify spending the terminal Action.  Late game, you mostly end up discarding Victory cards, and even when you do hit a Gold or Silver, it’s too little too late.

Thief becomes much more effective when you have an army of Spies able to hunt through your opponents’ decks until they find Treasure worth stealing.  You should depart from typical Spy norms when you have a Thief in hand—be willing to discard your opponent’s Victory cards and Coppers until you find Silver or Gold.

(Do note that a devious counter to this strategy is willfully refraining from revealing Reaction cards until the Thief is played.  Then all you’ve done is top-deck good Treasure for your opponent, while discarding junk he doesn’t want.)

It’s conceivable that Scrying Pool could replace the Spy, but it’s much less convenient to buy and therefore hard to achieve the critical mass necessary to use the Thieves effectively.

This entry was posted in Combo of the Day and tagged scrying pool, spy, thief. Bookmark the permalink.

5 Responses to Combo of the Day #7: Spy/Thief