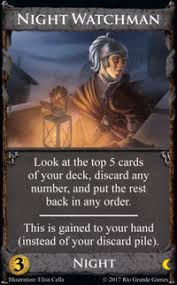 Two weak cards. Combined they are a powerhouse. In the case of Night Watchman and Tunnel it’s not entirely clear if that’s true. Let’s find out.

It’s well established by the Dominion community that Dungeon and Tunnel are a great combination. Dungeon discards Tunnel for Gold and looks at 13 cards with each play to find Tunnel(s). The huge amount of deck cycling means you’re buying Provinces early and often. The deck also doesn’t really stall in the end game thanks to Dungeon’s filtering. It outperforms all Big Money decks and the weaker engine decks. It also has enough speed to keep up with the rush decks (like Ironworks/Gardens).

Night Watchman only looks at 5 cards but opening Tunnel/Night Watchman almost guarantees having a Gold before the first shuffle. On top of that, when you buy the Watchman he goes straight to your hand. Let’s simulate it to find out its matchup vs Dungeon/Tunnel.

Dungeon/Tunnel wins 80% of the games vs a mere 17% for Night Watchman/Tunnel. The average $ generated each turn is also interesting:

Here’s the optimal game plan (buy rules need to be evaluated from top to bottom for each buy):

Notice this deck never buys Gold or Silver (this would actually decrease the win rate).

Here’s the Dungeon/Tunnel Bot for reference:

Night Watchman/Tunnel’s strength/speed is comparable to Gear Big Money (one of the better Big Money variants). You shouldn’t try this strategy if there’s a moderate/strong engine or rush strategy available.

You can improve this deck by adding a strong attack (like Mountebank). Adding strong terminal draw (like Wharf) will also help. There’s an idea to incorporate it in an engine as payload, but that’s probably too cumbersome. NW/Tunnel doesn’t work very well in decks that draw a lot of cards because unlike other Tunnel enablers, NW doesn’t want you to actually draw your Tunnel, which is what makes this synergy strong. Night Watchman’s filter effect mimics trashing effects, so adding a trasher won’t help much.

This entry was posted in Combo of the Day. Bookmark the permalink.