This article is being discussed on this thread. Please feel free to join in on the discussion. 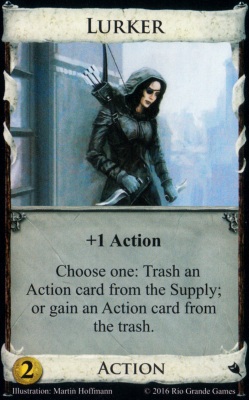 Introduction
Lurker is a combo card, and the thing about them is that they tend to depend on the other nine kingdom cards. It is interesting to note that while Lurker does have many amazing combos with nearly all of Dark Ages, by itself the card is usually underwhelming. The primary problem with Lurker is not the ability, which is a fantastic one, but rather the actual card in your deck. The other nine Kingdom cards may or may not offset this disadvantage. Before anything else, let’s talk about a common mistake with Lurker: the opening.

Oftentimes, players from across the experience spectrum open with a Lurker, and more often than not it is the wrong play. Here is a likely familiar example to those who have played a couple of Lurker games.

It is Player 2 to move. Does Player 2 buy Lurker or not?

Usually Player 2 feels obligated to pick one up, just to deny Player 1 from getting his hands on a potential free card. From there, the game devolves into a Lurker game of chicken, where neither player plays the Lurker. Both players feel like they have to justify the Lurker buy, so they pick up other Lurkers. It is understandable that someone would want two Lurkers early on in the game. Two Lurkers go together as well as peanut butter and jelly. But it is also potentially the wrong play. Usually, there is something better to do on the board.

There is a better solution out there that people don’t contemplate when playing in this scenario, and that is to delay the Lurker buy. Instead of Lurker on Turn 2, buy a better card. Player 2 can gain the Lurker on the second shuffle, and Player 1 still has to keep in mind the Lurker game of chicken. He may go for it, in which case perhaps he gets a second Lurker to increase his chances of landing it upon the next shuffle. This may or may not work, and Player 2’s deck should be slightly the better for it either way. Player 1’s deck will still have at least one glorified Ruined Village inside no matter what the outcome.

If you are not going to use the Lurker you gained, there had best be a good reason. Think about delaying the Lurker buy. Lurkers in hand make it harder to hit price points early game, and there’s no incentive to play a single Lurker if you do not benefit. A good maxim to remember: Decks that use Lurker are good, but decks that have Lurkers are bad. Picking up a Lurker without a serious plan can be serious trouble. With that being said…

There are many times where getting Lurkers early or even opening them is a strong play. Knowing these scenarios will elevate your play. Here are some of the power cards to look for.

Donate/Chapel/Bonfire: The main issue with Lurker early on is connecting two of them. What better way to connect them than to trash down your deck? Donate enables a potential double Lurker opening right out of the gate, and cards like Bonfire and Chapel are some of the fastest trashers in the game. This list is not exhaustive, and other fast trashers like Remake may also be enablers.

King’s Court: Lurker with King’s Court. Is there really anything else to say?

Hunting Grounds: Any time you see Hunting Grounds with Lurker on the same board, sound the alarm bells. This is a very potent rush. Uncontested, the rush ends the game on a three pile in 11-12 turns with approximately 33 points. Nothing to sneeze at! Open double Lurker, trash Hunting Grounds for a Duchy (or Estates if Duchy pile is empty) and always buy Lurker. When the Duchy and Hunting Grounds pile is out, simply trash with Lurker every time to empty the Lurker pile.

Possession: Possession alone demands a double Lurker opening. Games with Possession and Lurker are bizarre and oppressive. The best general advice is never buy economy, look to buy points right out of the gate and drive piles with Lurker as fast as you can with the points lead.

Cultist/Fortress/Squire: Cultist and Lurker is usually quite bonkers. There are games that end in 7 turns when both of those cards are on the same board! Trashing Fortress into hand builds your deck while also making your Lurker a cantrip for a play, not to mention the massive engine potential. With Squire hitting the trash can comes a free attack card. Just be careful with gaining the Squire back! Both Lurker and Squire do not draw cards.

Tomb: Tomb is a mega Lurker enabler. Each trash by Lurker is a point into your pocket. Trash useless cards when your Lurkers don’t connect! Consider aggressive pileouts!

Lurker works well with sifters and cyclers, especially top tier ones in Forum and Dungeon. Secret Passage can help connect two Lurkers for maximum benefit. Minion can help enable Lurker gains. Artificer can topdeck a Lurker to connect two on the next turn for a low fee of -2 Cards.

A quick trick for virtually unbounded draw: play Procession on a Hireling, and Lurker the Hireling back. Not only do you get +2 Cards for the rest of the game, but the Procession doesn’t even get set aside, letting you perform the same action again next turn!

Speaking of trashing terrible cards, sometimes your opponent will take those Pirate Ships if you’re feeling generous with superfluous Lurker trashing. Just make sure that your silly pile driving won’t give your opponent a potential win in the future! There has already been documentation of a throwaway Lurkered Transmute winning a game later on when regained.

Speaking of Potion cards, Lurker also loves those, if not for potentially skipping a Potion buy. Besides Possession, Scrying Pool worships Lurker. The more Lurkers there are the better. Scrying Pool can draw them all up and Lurker can increasingly gain more actions to draw. Golem likes Lurker as well, albeit perhaps not when the Golem hits two Lurkers.

As the game progresses, Lurker can become less of a gainer and more of a threat for a three pile ending. Always be aware of potential three piles and how many cards your opponent can drain. In particular, Throned or Kinged Lurkers can make games end incredibly quickly, and King’s Court is one of the potential triggers for aggressive early Lurker openings!

Of course, talking about hypotheticals is fine, but what about actual games? Here are four different boards. Your goal is to analyze the board and assess the use of Lurker (if any).

Playing against multiple Torturers a turn will be a slight nuisance despite Masquerade and Lurker doesn’t seem to be doing that many special things here. There’s nothing to invest in. There are cute tricks with trashing Mining Village and Lurker but Conspirator already provides the money. The game looks primed to end on a three pile with Vineyards being prime VP. Lurker seems to be best here as a cheap action and to threaten piles towards the end of the game.

This game looks to go on much longer. This is a prime Lurker game. There is an amazing sifter in Forum and good cards to gain in Scrying Pool/Baker/Mill. The engine will be double Province a turn in the ideal world and Mills will help provide points and economy. Lurkers will add cards to make Scrying Pool even better. The game will possibly end on some sort of three pile before the engine can be fully realized, mostly due to Lurker.

This is a highly complex board with three different strategies, listed in order of effectiveness:
1. Nobles/Council Room/Lurker/Bishop Engine
2. Lurker/Talisman/Vineyard rush
3. Council Room/Platinum BM
This isn’t exactly a board where it is immediately obvious what to do, and that’s okay. The rush seems like the most intuitive thing to do on this board, and it’s nearly the best thing. Bishoping Nobles and getting them back via Lurkers seems like a good way to score infinite points.

Enchantress is easily the most important card here, as it is the only draw, and a good Courtier target as a fancy bonus. Certainly this is not a board where you will get a Lurker on a buy, but rather a wonky turn where you can only get one from trashing an Estate and Coppers with Forge. Lurkers are not terribly important here, although they are nice to get a University which gets Enchantresses and a Courtier. While Forges and Expands are high cost cards and that is a prerequisite for Lurker investing, Baron/Silver or Baron/Enchantress are fine openings to potentially spike $7 already. The draw/sifting is also subpar, although Wandering Minstrel might help to connect two Lurkers. The endgame here seems to be Expanding/Forging things into Colonies.

Lurker is an incredibly high skill card, and thus correct or incorrect useage will impact your chances more than usual. A suggestion: Play with each of the Lurker combos listed for awhile. Then, queue up random games with Lurker in it, and try to implement it into your strategy every time. Every time it fails, assess why it did. Was the build order wrong? Was the Lurker gained too early, or perhaps too late? The best way to get good with cards is to practice using them, and Lurker is well worth investing in.

1 Response to On Lurker