This is a revised version of an article by axlemn, originally posted on the forum, and incorporating analysis from jomini. 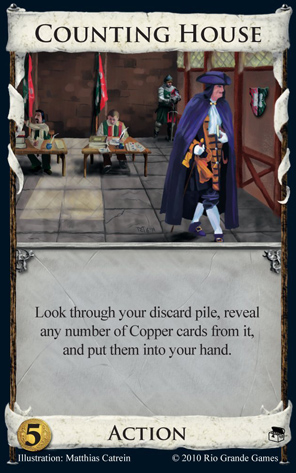 Counting House is not a great card.  In fact, it’s not even a good card, when you factor in its price: because it’s $5, every Counting House buy means you’re passing up another $5, and $5 Actions are some of the best Actions in the game.  It depends on a bad card (Copper) and is cripplingly awful when you draw it at the start of the reshuffle.

But here’s a bold statement: Counting House is underused.

Since it’s a 5-cost, it makes sense that Counting House is not a good buy most of the time since other 5-costs are just so good.  Strategies that revolve around Counting House, however, always seem to be discounted immediately.  It’s almost never used in a serious game.  That seemed suboptimal.

So why do people ignore Counting House so often?  Because if you use it the most obvious way — if you’re just using Counting House for the occasional very high +coins — you see it will fail in nearly every common decktype.

With Big Money, almost any decent, Smithy-style enabler will do better.
With an Engine, you’re better off trashing those coppers.
With Big Draw, it does absolutely nothing.
If you’re trying to use it in a game while also trying to rush for duchies, it will fail.

There are some extremely rare exceptions to these principles, which are mentioned later.

So how can we ever use Counting House?

There are essentially two ways to use Counting House.  The first is a gimmick: towards the end of a game, you might find yourself nearing the reshuffle with some top-decking or deck-rigging potential.  (For example: Royal Seal, Watchtower, Develop, Inn.)  If you only have $5 to spend this turn, you can just grab the Duchy and move on, but you can also top-deck a Counting House and guarantee a big turn next turn (in exchange for possibly lousier future turns.)  Similarly, Golem-Counting House or Chancellor-Counting House are equally gimmicky ways to make use of it.

The second is to make it the centerpiece of your deck.

With the 4 best enablers for Counting House, you can somewhat consistently grab 4 Colonies by turn 14-16, and often 8 by turn 19.  In long games, with Worker’s Village or Pawn support, you can sometimes double-Colony to make up for early round dead turns.

Here’s a real-game example.  This deck is a deck type all on its own.  And like Outpost, it can be a card that can win you the game if you recognize when to use it.

Playing the House – The Enablers

You’ll either need to spend turns buying Coppers, get +buys, or gain them.

A Counting House-centric deck functions best by utilizing early-round +buys to get Coppers (or more Houses) as often as possible.  The reason for this is that if you draw 2-3 +Buy cards in the first turns of a round, that is, before you draw most of your Counting Houses, you’ve increased the value of every Counting House in the rest of the round by 3-4, assuming you used your regular Buy on copper as well.  Sacrificing one turn and gaining Coppers for an entire improved round?  That’s like a beefed-up Tactician.

With a deck large enough to prevent you from having to reshuffle again, you can then buy a Colony, or sometimes even two, for every Counting House that remains in your deck.

Hamlet, Worker’s Village, and Pawn are the best sources of +Buy if all you care about is getting more +Buy.  You really don’t care about boosting your average money when playing the House.  You care more about boosting your decksize to reduce reshuffles, and increasing the average number of buys you’ll get before drawing your Houses.  And you care a lot about making double-colony turns possible.

The first few rounds you’ll want to obtain as many +Buy cards as is possible.

The problem with Gardens-type cards like Woodcutter and Bridge is that they are almost all terminals.  They look helpful—and they are—but not late-game.  When you get them early on in a round, you can’t get more than one +buy from it.  This means you will never be able to get a +buy on a Counting House turn if they are your only source of +buy, which means no double-colony.

Double-Colony not only feels good, but often it’s necessary to lock down a game.  You almost need a double colony turn at least once, or at least a colony-province turn, to make up for the fact that on some turns, potentially even your second-to-last turn, your buys might just be a handful of Copper.

However, while Woodcutter and the like shouldn’t be massed, they remedy the hardest part of using Counting House with something like Hamlet: reliably reaching 5.  In an absolute worst case scenario, you can buy a single silver and wait, or if you’re really gutsy, you can just buy coppers and enablers for 4-5 rounds.  With enough coppers and careful enough reshuffling, you’re mathematically guaranteed to hit 5 after about 6(?) such turns.  Also note that because hitting 6 is completely unhelpful, any number of turns spent buying silvers instead of an enabler should probably hurt more than help.

Sifters are a good addition to Counting House decks because they allow you to move through your deck quickly.  It doesn’t matter whether your Coppers are in the discard or in hand, and so you can freely discard Coppers to Cellars and Warehouses so you get to your Counting Houses.  Cellar has the added benefit of allowing you to precisely time your reshuffles, and being slightly cheaper and easier to pick up on a +Buy with the Counting House.  (Havens accomplish something similar.)

Cache both adds Coppers and gives you cheap Golds so that even on non-CH turns you can hit 5 (early on this can mean more CH or Caches, late this is good for Duchies). If you can follow your deck well, you can add Cache buys to add +2 coin to a CH coming up next turn.

The other major problem with Counting House is figuring out how to use it.  Counting House has a lot of variability, and if you aren’t careful about when you trigger your reshuffles and or don’t track the number of houses you have left in your deck, you can lose valuable turns when your coppers are high-powered by triggering reshuffles too early.  (One reason why Cellar is better than Warehouse for this kind of deck.)  Will playing that worker’s village for the extra copper this round will mean you’ll miss the colony next hand?

Be sure to keep track of how many 5-card hands you will end up drawing before the reshuffle.

This is the second most useful card to use with Counting House (after Copper).

A game versus RomaNorgy. Provinces are out by turn 14, even though neither of us were playing even near perfectly.  RomaNorgy thanked me after for the new strategy (which I got from O, so here’s passing on the thanks).

After dismissing the idea of a ‘Counting House + Coppersmith combo’, the second thing people notice about Counting House is that it seems like it shouldn’t be hurt much by certain attacks.

Here are games with Ambassador, Sea Hag, Sea Hag, and Mountebank respectively.  If you’re careful enough, the House will be able to face off against the cards we imagine it should.  It doesn’t have a 100% winrate (see game 4), but it does hold advantage.

If there’s nothing else going on or the only attack on the board is Militia, Goons, Sea Hag, or Mountebank, Counting House might be a good choice.  The House benefits from slow environments where the number of good turns matters more than the average of turns.  It can pick up 4’s, since otherwise it’ll just be getting more +buy cards.  Many attacks don’t hurt counting house nearly as much as they hurt Smithy-BM type decks.  Notably, Ghost Ship will actually help a player going Counting House-Scheme.

When you’re playing Counting House, you are also going to have a lot of turns where you’ll have 4, and this means that you can use things like Militia and Cutpurse with essentially no drawback.  They will help you hit the 5s you so desperately need, and avoid the 6 that temps you into buying golds.  Unfortunately, I don’t have solid statistics, and if anyone would like to run some, I would use them to revise this discussion.

Counting House is much, much better in multiplayer games.  The reason is that you are giving up less.

Consider CH vs Witch in 2p: you forego attacking the other guy and have a 10-0 split in the Curses. The loss of punishment for your opponent is a very high opportunity cost. CH vs Witch vs Witch means that you end up with a 9:6:5 curse split and you can spend your terminal 5 on a card that gives you a Duchy or Province most of the time you play it in the late game. The opportunity cost is now only 4 curses, not 10.

Likewise if everyone else in 4p goes for Ghost Ship, you can count on them all playing 3 card hands (most of which will spend an action on +2 Cards) and you can go for CH as you don’t care about hand size. Opportunity cost here is even lower.  And of course, attacks that are countered by Counting House (Noble Brigand, Mountebank, Jester) means the opportunity cost of Counting House is much lower.

Summary:
Counting House is situational, but when the situation fits, it’s amazing.  Looking to make it work every turn without Scheme in a 2p game isn’t very likely, but an enabled Counting House is a card well worth considering.

This entry was posted in Prosperity and tagged counting house. Bookmark the permalink.