This is a revised version of a guest article by WanderingWinder, originally posted on the forum. 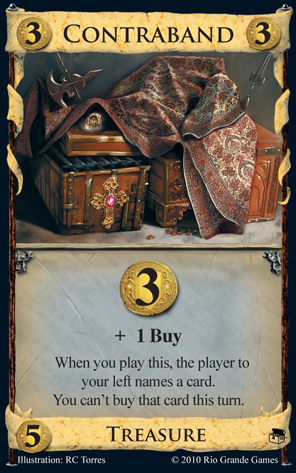 For example, if you play a standard Big Money-esque game, where all you want is Gold and Provinces, Contraband is very bad.  Early on, your opponent will just block you off of Gold, and later, they block you off of Province, which just makes it very difficult to win. And indeed, in any case where you’re really needing one card, it’s not going to be good for you.

Contraband is also rarely good in multiples, because if one thing doesn’t totally block you, two much more likely will – each Contraband you play means a new thing your opponent can block.  So oddly enough, this Treasure tends to be best in an “engine”, where you play a lot of different Actions, because those tend to have the most different cards that can help you, can make use of the buy, and proscribing one card just isn’t as big a deal.

Because of the enormous complexity of choices, the card doesn’t simulate so well. So unlike most of my articles, there’s no simulation data backing this stuff up. But lots of thought and experience.

Before we go any farther, I think it’s important to note a couple of tactical items about playing Contraband. The first is that you don’t have to play it! Many times, in the endgame, you need to be buying a particular card – say a Province. Well, if you can afford the thing anyway, just don’t play the contraband!

Second, if you do play the Contraband, play it first, before your other treasures. The less information you give to your opponents, the better, as they can’t know what to proscribe nearly so well. The exception is if you want to trick your opponents — play three Coppers, say “oops”, and then play your Contraband.  Your opponent will block Gold, thinking you only have $6, and then you play another two Coppers to buy a Province.

A corollary to this is that Contraband is not so good with the handful of cards that reveal your hand to your opponent. Menagerie might be the biggest exception here, especially when it goes off, but even it can have some weakness. But cards like Hunting Party, Crossroads, and an engine that draws your whole deck are really bad for Contraband, because it gives your opponent a solid insight into what you’re trying to buy with the Contraband.

To play Contraband, you first need to know how to play against it.  The most basic way to shut down a Contraband player is to block Gold then Province.  This is Contraband’s most fundamental weakness: if you spent $5 on Contraband, that probably means the power $5’s (Laboratory, Hunting Party, Witch, Wharf, etc.) aren’t out, so you really need to get to $6’s to be able to buy Provinces.  Being stuck with a whole bunch of $3’s and $4’s is not the route to Provinces, generally speaking.

Sometimes, though, another card is more powerful than Gold early on.  This is most common if they are playing an engine deck that needs a lot of Actions: in those situations, you’d rather cut them off from the KEY card they need in their action deck: maybe they’re lacking in Smithies or other +Cards, +Buy, or perhaps Villages.

Contraband is even more painful in the endgame, however, especially if the Contraband player is behind.  Blocking Provinces is the most obvious, which works regardless of whether you are ahead or behind.  But more importantly, there can really come times where Provinces don’t cut it, and they’re going to need a lot of Duchies. Block them from Duchy. I cannot stress enough how important this can be. If they’re going to need lots of Silk Roads to come back, block them from that. In a great twist of events, if they’ve played six Goons with their Contraband, you probably want to block copper.

Here’s an example by chwhite where, going into the final turn, his opponent is down 36-43 and plays Contraband with two Colonies remaining.  chwhite blocks Province, because if his opponent double-Provinced, the opponent would be up in a PPC situation.  Instead, the opponent is forced to take the penultimate Colony and a Duchy, leaving chwhite free to buy the last one instead.

Here’s a game against -Stef- where he uses a Contraband together with his Apothecary engine as… basically his entire economy (mine is not so much stronger).  The key here is that Apothecary is very very fast, but doesn’t have tons of staying power.  So, early on, I block Gold, which is standard.  However, I continue doing this for quite a while – indeed, there were multiple occasions where he drew his ENTIRE deck, played Contraband, and I knew he was holding $10p, and I block… Gold.

Now, why do I block Gold instead of Province when he has $10p to spend?  Well, I could block Provinces later on. More importantly, all the money in his deck was $10p, and $3 of that was tied up in Contraband, meaning he couldn’t possibly buy a Province without one.  If I had blocked Province instead, -Stef- would be able to buy Golds and no longer rely on Contrabands; by blocking Gold, the nature of his engine means he ends up stalling out.

Then we get to the really interesting part of the game, where I start blocking him on Duchies. He’s behind and needs Duchies to come back.  In particular, on Turn 22, I blocked Duchy—he might have had enough for a Province, but if he did, and I blocked Province, he would have won anyway by buying Duchies and Estates.  So this is another principle to keep in mind: if you need good luck to win, play for that luck.

Similarly, when playing from behind, in a situation where they can end the game on three piles, you absolutely need to be able to use that Contraband prohibition on that third pile that they are trying to run out.  I’m pretty sure I’ve blocked Curses before (though it’s very hard to look for that kind of log). In these situations, you’re very often lost either way, but you need to at least give yourself a chance.

More generally, beyond the simple “Block Gold Block Province”, you should just keep careful track of your opponent’s potential buying power.  If they remake 2 cards, play Contraband, well, they only have 1 card left in hand, and if it’s early enough in the game, there’s a good chance you KNOW they don’t have a Gold – so don’t prohibit a 6-cost, as you already know they can’t buy it.  Similarly, if they reveal their hand, for Menagerie, for a Bureaucrat, for whatever, pay attention. If they put back a card, pay attention to what that is. Pay attention to where they are in their reshuffle, and what they’ve already played/discarded. Most important, pay attention to what’s in their deck. You want to know what they have, so you know what they’re capable of, and you want to know what they want to get, so you can stop them from getting it.

Now that you know how to shut down Contraband, how do you play it?

The biggest thing is that you need here is, as I said, options.  In particular, you need options at the $6-$7 level.  Nobles, Harem, Hoard, Goons, etc. will all defeat the standard anti-Contraband strategy of blocking Gold every time.  Of course, later on, the main thing to block is province, so alternate VP can help a lot too. The important thing here is that you need to maintain some flexibility. If you buy Contraband and then lock yourself into a Gardens strategy, well, your opponent is just going to block Gardens and the fact that you could buy Province or Gold isn’t very helpful.

There’s one particular alternate VP synergy I’d like to highlight: Fairgrounds.  Not only is it a nice $6 target, and a good source of alternate VP (potentially exceeding a Province, so even if you are blocked from it you can still buy a Province), but with Fairgrounds you also want to buy pretty much every card on the board. So no matter what they block, there’s going to be something for you to pick up, and the +Buy really, really helps.  Here is a game where I use contraband with a bit of an engine, mostly a big potpourri of stuff, to pump up fairgrounds and help me win a long game against ddubois. Of course, it also features Nobles, so it’s really a model game for contraband being a nice card.

Likewise, Vineyard works well too.  The +Buy helps you grab the Vineyards, you can frequently buy Vineyards on non-Contraband turns, and on Contraband turns you can pick up your choice of Actions.

Another way of getting “options” is with those buy-one-get-another-free cards: Border Village and Haggler.  Black Market functions similarly by giving your opponent three more choices to block, and has the added benefit of getting your Contraband played super early.

So in general, Contraband needs options.  Either this means you have multiple $6 cards to choose from, or it’s not such a big deal that you can’t get one particular card.  In an engine, in particular, you often find yourself needing two cheap cards rather than one expensive card.  (But the $5 cost is usually a big deterrent, because if you have $5 to spend, why not spend it on an engine part?)

The other nice kind of card to help Contraband is a trash for benefit card. Stopping you from getting Gold is pretty harsh in the early game, but the real drawback to Contraband is the endgame blocks. I mean, usually, you’re able to pick up a couple components to help you if they block that Gold – two Silvers at least.  But losing out on that Province is particularly painful.  With a trash-for-benefit, you can get some good use out of Contraband early on and then trash it in the endgame.  Its high cost becomes a boon: Salvager, Apprentice, Expand, etc. all perform nicely with Contraband for fuel.

Overall, it’s not a very good card, but a lot better than the plague some people tend to think it is, in the right circumstances. And the kind of game it can create is a lot of fun, and can make for quite a lot of skill, and a kind of skill you don’t get out of many other Dominion cards.

This entry was posted in Prosperity and tagged contraband. Bookmark the permalink.