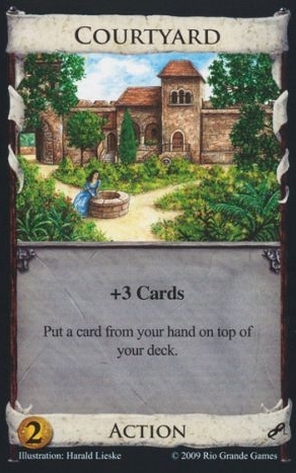 Appearances can be deceiving.  Courtyard looks (and is priced as) a gimped Smithy, effectively only drawing 2 cards instead of 3.  In reality, the top-decking effect makes Courtyard a far stronger card than Smithy, at least when you aren’t actually looking to draw your deck.  It means any Actions that you draw dead can be placed back on top of your deck, and any incomplete combos (like Fool’s Gold) can be placed back to be drawn another day.  In a single-Action game, where you’ll only have a single terminal Action and several nonterminal Actions, Courtyard is far preferable to Smithy.

In many ways, Courtyard is like Haven.  It smooths your turns and assists your combos so that you can draw $8 and $8 instead of $7 and $9.  Multiple Courtyards are much less useful than multiple Havens, but Courtyard makes up for its terminal-ness by drawing you to a 7 card hand first.  In other words, Courtyard tends to lend itself to Big Money, while Haven lends itself to engines.  This is borne out by simulator results, where Courtyard is one of the premier Big Money enablers (along with Wharf and Jack of All Trades).

Where Courtyard really excels is when you run a predominantly Big Money deck that has a few combo pieces in it.  Tournament, Baron, Fool’s Gold, etc. are all very strong additions to a Big Money-Courtyard deck.

Paradoxically, where Courtyard is least effective is when you actually try to use it at a Smithy.  Here, you’ll just find yourself re-drawing that top-decked card over and over again, and you’re really just drawing 2 cards at a time.  The point of Courtyard is not actually to draw +3 Cards; it’s the deck rearrangement and handsize increase that makes it such a strong card.

This entry was posted in Intrigue and tagged courtyard. Bookmark the permalink.