Disclaimer: Dominion does a really great job of balancing its Kingdom cards.  Every card has some situations where it shines, and some situations where it doesn’t.  Nevertheless, some cards just end up being flat-out better than others, either because they are more useful more often, or just ridiculously good when they are useful.  Don’t expect this list to be objective.

The $4 cards have been getting better and better, with quite a few cards on this list from the most recent expansions.  As a result, many fine cards are excluded: Envoy / Smithy, Caravan, Militia, Gardens, Horse Traders, Salvager, etc.  But then again, this is the best list, not the fine list.  Onto the Honorable Mention:

Young Witch is incidentally a convenient illustration of why so many fan-made reaction cards are terrible: when you have a great reaction, what actually ends up happening is that no one buys the Attack in the first place.

As a bonus, it has nice synergy with Tunnel, and even itself (since you’ll have Curses to be discarding). 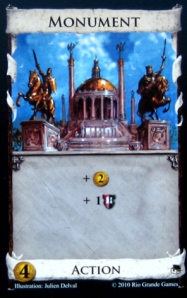 Consistently underrated, the quiet Monument isn’t sexy like Tournament or obvious like Sea Hag.  But the power of consistently earning 1VP makes it a monster in non-engine games: in an average money game, you might end up shuffling around 4-6 times, and once you get to that 4VP threshold you’re essentially forcing your opponent to split the Provinces 5-3 in his favor.  Add in some method of repeatedly playing Monuments, like Hunting Party or Fishing Village, and Monument experiences a quasi-Goons effect, where your engine has to be designed to keep up in both green cards and VP tokens. 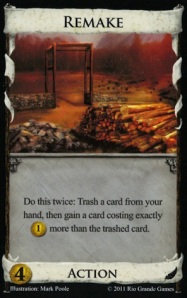 We have already commented on how strong early game trashers are when they also improve your deck, and Remake is no exception.  It ranks along with Chapel as one of the premier early game trashers: not only does it turn your Estates into Silvers (or Fishing Villages), it also has the added benefit of upgrading your other early game utility cards (usually $4’s) into more useful cards (usually $5’s).  No other card is faster at improving your deck’s average card value than Remake.

Remake tends to work really well with the later expansions: it encourages diversity, which powers up Menagerie and Fairgrounds, and it works quite well with many of Hinterlands’ on-gain cards, like Ill-Gotten Gains.

There are superb $4 cards (like Salvager), there are elite $4 cards (like Monument and Remake), and then there are transcendent $4 cards.  Tournament kicks off the A-list with probably the most unique power (however that may be defined) in the game.  It’s no coincidence that the five highest “Win Rate With” cards are all Prizes, since they are some of the best Actions in the game.  Winning a Tournament not only gets you one of these awesome Prizes, it denies it to your opponents, puts it on top of your deck, and heck, usually draws it for you to play right there.  Did I mention Tournament is usually also a $4 Peddler?  It’s like a Treasure Map that doesn’t suck when it doesn’t work.

The only thing that balances Tournament out is that its Prizes often come right around when you need to be buying green cards, so by the end you’ll just be taking the Duchy.  But winning an early Tournament is a massive advantage for someone who is probably already doing quite well.  You don’t always want to open with Tournament, but you ignore it at your peril if there is any kind of help for it. 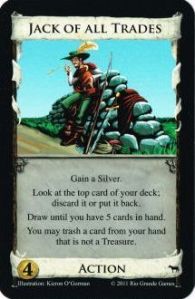 2. Jack of All Trades

Jack of All Trades debuts at #2 as the premier Big Money assistant.  DoubleJack reigns supreme over most other money strategies, especially when attacks are introduced.  Any set that doesn’t have a very strong engine setup is going to struggle to do much better than DoubleJack.  The fact that it trashes, sifts, fills you up to 5 cards, and gives you free Silvers makes it embarrassingly easy to do well playing just an algorithm.

The flip side is that, like most money strategies, it can be beaten by precisely constructed and executed engines.  And in those engines, you don’t want Jacks at all.  Smithy and Wharf and all the other Big Money assistants have some role to play in an engine; Jack actively hurts most engine setups.  It doesn’t integrate into an engine: it only works well on its own, in its one well-defined role.  Which is vaguely ironic for a card named Jack of All Trades.

Jack accelerates the game; Sea Hag sits on it.  It loses heads-up battles against Jack or Masquerade, but it’s a curser, and it’s the fastest cursing Action you can buy.  It really doesn’t get much meaner than slamming that Curse on top of your opponents’ decks.

$4 is as cheap as a cursing Action can probably get without leading to degenerate games, so Sea Hag looks like it will remain the primary early-game curser for quite a while.  It just goes to show how strong cursing attacks really are in Dominion: Sea Hag provides no benefit to your deck and is completely useless after the Curses are empty, but is nevertheless still one of the strongest cards in the game.

This entry was posted in Rankings and tagged jack of all trades, monument, remake, sea hag, tournament, young wtich. Bookmark the permalink.