This is a strange category, since it’s really hard to call any of the $6+ cards “bad”.  Even the worst are only situational, and none are as situational as the worst $5 cards.  On the other hand, that just makes the disparity between these and the truly dominant $6+ cards all the more staggering.

This is ordinarily a great $6 buy, since in Province games you can get all the Gold you need just from Hoard.  But its problem is twofold:

1) If you can’t get through your deck, then you’re essentially getting $1.5 per card.  Unless the Victory cards you’re buying are making a meaningful difference on the score, you’re building a deck whose buying power is even worse than pure Silver.  This is especially problematic in Colony games, where without a card like Warehouse or Salvager, you’re probably better off using Gold to directly jump to Platinum.

2) If you’re running a complex Action chain, the Golds and Victory cards are going to gum up your engine and make it difficult for you to draw all the components together.  This is why Hoard works much better with Harem than with Nobles.

True, Bank is usually worth as much a Gold, and often much more.  But without +Buy, you almost never really need that much cash, making it a needless risk when Golds are perfectly adequate.  They’re especially comical in Province games, where you’ll see someone play them for +$6, having $20 in total, and buying a single Province, and then playing them for +$2 the next turn to buy an Estate.

Of course, like all $7 cards in Province games, if you actually draw $7 in the mid-to-late game, you’re likely to punch a hole in something, what with the $8 card being so much more important.  That’s what you get for taking Fishing Village instead of Silver.

Forge is the best all-around trasher in the game, since it’s basically a Chapel with benefits.  The problem is that it tends to come too late.  Chapel is as powerful as it is because you’re guaranteed to be able to get it on Turn 1; Forge usually won’t come into your deck until you’ve already got an engine set up.  You can’t really rely on it as a trasher in the same way as any of the $3’s or $4’s, and worse yet, it depends heavily on drawing the right trashable cards.  Against multiplayer Militias, for instance, Forge can barely get off the ground.

It’s a nice midgame trasher if there’s no other way to trash, but it’s so slow that unless you’re drawing large hands and/or good combinations of cards to trash, it’s often outrun by someone who spent their $7’s on King’s Courts instead.

Forge gets some bonus demerits for the analysis paralysis it induces, since calculating optimal trashing is technically an NP-complete problem. 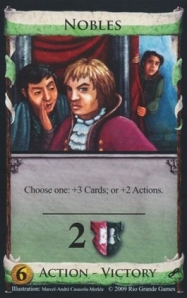 Nobles is probably one of the most overrated cards in the game.  Building an +Actions/+Cards chain with just Nobles is an exercise in futility, since two such Nobles only works out to a single Laboratory.  It’s a nice supplement on top of a pre-existing +Actions/+Cards engine, where Nobles can substitute for Smithies rather than for Villages, but without any support, the Nobles will usually just end up as dead cards.  Even a Great Hall is often superior, since at least it’s useful by itself in a hand.

In Province games, they’re at least important to fight over, since if you’re on the wrong side of a 5-3 Nobles split you need a Duchy + Estate to equalize, but in Colony games they’re just a pretty distraction from Golds and Platinums.

One of my favorite cards in the game, but it’s been badly outmoded by Venture.  It has a few advantages over Venture, but the fact that it can’t pick up other Adventurers is a huge mark against it by making it an essentially un-spammable card.  Unlike Venture, buying more Adventurers doesn’t actually increase your overall buying power, and unlike Venture, drawing more than one in your hand does you very little good.

Because it draws the Treasures into hand rather than playing them immediately, it has limited combo potential (e.g., Village/Adventurer/Mine), but 90% of the time it’s just not worth it compared to a Venture stack.

81 Responses to The Five Worst $6+ Cards