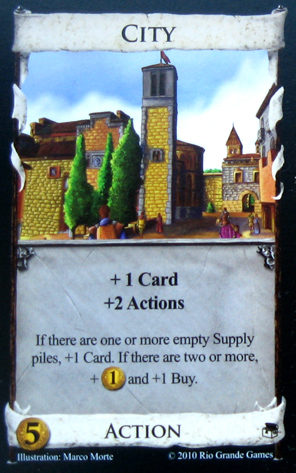 Can I start by noting how well-designed this card is, thematically?  It’s one of the few Dominion cards that makes perfect thematic sense: Cities start as Villages, but slowly grow and develop …

City is one of those cards very susceptible to groupthink.  The first time anyone gets spanked by the Unstoppable City Stack (“UCS”), they vow that next game they will buy up the Cities themselves.  This leads to a City race, which, of course, further powers up the Cities.  Maxxed-out Cities are absolute juggernauts, easily drawing your deck with bonus money and Buys to boot.

But before committing to blowing all your $5’s on Cities, it’s important to identify the situations under which Cities are likely to become anything more than Villages.  Piles run out most frequently in multiplayer games; similarly, Cities will level up quickly when popular cheap cards are available, like Fishing Village, Caravan, or Peddler.  (Great Hall and Island, too, for although they are not technically super-popular, they are fewer in number in 2-player games, and a great pile to run out as the City player.)  This is especially true if your opponents are buying Bridges, Talismans, and other Buy multipliers—though you should also beware them ending the game on piles before you have the chance to deploy the UCS.  Curse-giving attacks are another reason to invest in Cities, by guaranteeing another pile that will inevitably be exhausted.

Of course, there’s the other question of what to do with all those extra Actions.  It makes a lot of sense to accumulate Cities when there are uses for the extra Actions, i.e., worthwhile terminal Actions to pair with it (Bridge, terminal attacks, trash-for-benefits, or +Cards like Smithy/Courtyard), and Villages are not available.  It also makes sense in Colony games, where you should have enough time to build up the UCS and pummel opponents with it.

So when are Cities bad?  When the opposite of the above apply.  When it doesn’t look like piles are going to be running out, and there aren’t any worthwhile terminals, a player that buys Cities is just spending a ton of money on Villages that become little more than Laboratories when you buy 10 of them.  Meanwhile, your opponent can be buying actual Laboratories instead, pummeling you before your Cities can get anywhere.  As mentioned several times before, $5 is an elite tier of Actions.  Blowing your money on Cities is just not worth it if your opponents, by buying other powerful $5 Actions, can buy up the Victory cards before your Cities upgrade into something better than a Village.

There’s a caveat to this rule: it’s easy enough to resist the allure of City if there’s only one opponent buying Cities.  But if you’re in a multiplayer game and two players are racing for Cities, you may have little choice other than to get Cities yourself, even if it means contributing to the emptying of the pile.  Otherwise they will empty the pile and then hold a huge advantage over you.

Likewise, if you’re in a City race with your opponent, and the Cities are split somewhat evenly, it is absolutely critical not to be the one to empty the first pile (unless it is the City pile itself), as it gives your opponent first crack at a mega-turn.  The difference between drawing 1 and 2 cards is huge. Ideally, you’d like to use Ironworks, Remodel, or Upgrade to empty a pile during your turn so you can be the first to make use of the UCS.

Ironically, when your Cities finally do hit maximum level, you might want to consider winning on piles rather than glamorous Colonies.  After all, two piles will already have been emptied; the plethora of Buys your UCS provides might give you the win just by emptying the Estates (or another pile), if your opponents haven’t yet built up a significant lead.

This entry was posted in Prosperity and tagged city. Bookmark the permalink.